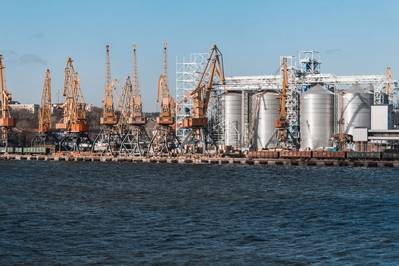 Ukraine's military has suspended commercial shipping at its ports after Russian forces invaded the country, an adviser to the Ukrainian president's chief of staff said, stoking fear of supply disruption from the leading grain and oilseeds exporters.

Russia earlier suspended the movement of commercial vessels in the Azov Sea until further notice, but kept Russian ports in the Black Sea open for navigation, its officials and five grain industry sources said on Thursday.

Ukraine is a major exporter of corn (maize), much of it destined for China and the European Union. It also competes with Russia to supply wheat to major buyers such as Egypt and Turkey.

Egypt's state grains buyer cancelled an international purchasing tender for wheat on Thursday as the crisis led to reports that no offers of either Russian or Ukrainian wheat had been received.

Russian forces invaded Ukraine on Thursday in a massed assault by land, sea and air, the biggest attack by one state against another in Europe since World War Two.

"The market is still struggling to get a clear picture of the actual military situation on the ground. The ports in the Azov and Black Sea so far seem not to have been damaged according to the initial shipping agency reports," one European grain trader said.

The trader said the market was looking out for any declarations of force majeure, meaning suppliers will not fulfil contractual obligations because of extreme circumstances.

Shipping group Maersk said on Thursday it has halted all port calls in Ukraine until the end of February and has shut its main office in Odessa on the Black Sea coast, because of the conflict.

Russia, the world's largest wheat exporter, mainly ships its grain from ports in the Black Sea.

The Azov Sea's ports are shallower and have less capacity.

Maripol, one of the biggest Ukrainian ports in the Azov sea, mainly handles relatively small ships of between 3,000 to 10,000 tonnes deadweight.

Another European trader, speaking on condition of anonymity, said such countries would have to seek alternative supplies if the ships were unable to depart in the near future.

Wheat prices in Chicago rose to the highest level in 9-1/2 years on Thursday as the conflict threatened to disrupt the flow of supplies from the region while European wheat futures climbed to a record peak.

Russia and Ukraine account for 29% of global wheat exports, 19% of world maize (corn) exports, and 80% of world sunflower oil exports.

Russia produced 76 million tonnes of wheat last year and is expected by the U.S. Department of Agriculture to export 35 million tonnes in the July-June season, 17% of the global total.

Russia supplies wheat to all the major global buyers. Turkey and Egypt are the largest importers.

Ukraine asked Turkey to close the Bosphorus and Dardanelles straits to the Russian ships, the Ukrainian ambassador to Ankara said earlier on Thursday.

Turkey's President Tayyip Erdogan said on Thursday he backed Ukraine's territorial integrity but there was no immediate response to Kyiv's request.

Under a 1936 pact, Ankara has control over the straits and can limit the passage of warships in wartime or if threatened.