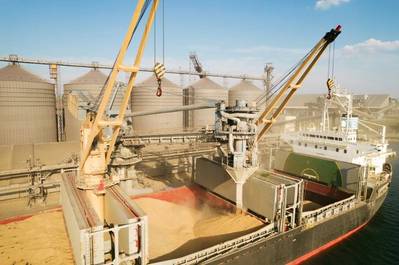 A deal to free-up vital grain exports from Ukraine expires on Nov. 19, and intense negotiations over the next few days will determine whether it is extended and possibly even expanded to help ease concerns about global food security.

The agreement, reached in July, created a protected sea transit corridor and was designed to alleviate global food shortages by allowing exports to resume from three ports in Ukraine, a major producer of grains and oil seeds.

Here are some of the issues:

WHAT HAS BEEN EXPORTED?

The pact created a safe shipping channel for exports from three ports in Ukraine.

Shipments of wheat have reached 2.9 million tonnes, or 28% of the total. Other commodities shipped include rapeseed, sunflower oil, sunflower meal and barley.

For a full breakdown of the countries and quantities exported:

Ukraine wants the agreement expanded to include more ports.

The three ports involved in the deal - Odesa, Chornomorsk and Pivdennyi - have the combined capacity to ship around three million tonnes a month.

Ukraine wants the agreement to include the ports of the southern Mykolaiv region, which provided 35% of Ukrainian food exports before Russia's invasion.

Mykolaiv was Ukraine's second-largest grain terminal according to 2021 shipment data so its addition would allow for a much larger volume of grains and oilseeds to be shipped.

Ukraine is also seeking a one-year extension of the deal and a streamlined inspection regime.

Russia has said its consent to extend the Black Sea grain deal depends on support for its own grain and fertilizer exports. Russia is a major agricultural producer and the world's largest exporter of wheat.

Moscow has not detailed its demands publicly but is believed to want the West to ease restrictions on state agriculture lender Rosselkhozbank, a move that should help facilitate more Russian exports.

HAS IT ALLEVIATED THE FOOD CRISIS?

A drop in shipments from major exporter Ukraine has played a role in this year's global food price crisis, but there are also other important drivers.

These include the COVID-19 pandemic and the climate shocks which continue to challenge agricultural production, mostly recently droughts in both Argentina and the United States.

The corridor has led to a partial recovery in shipments from Ukraine but they remain well below pre-invasion levels and will not fully recover for the foreseeable future.

Transporting grains to ports there remains challenging and expensive, while Ukrainian farmers have reduced sowings of crops such as wheat after in many cases selling last year's crops at a loss, with domestic prices remaining very low.

HAS IT DRIVEN DOWN GLOBAL WHEAT PRICES?

Prices of wheat on the Chicago Board of Trade Wv1 rose sharply in the aftermath of Russia's Feb. 24 invasion of Ukraine but are now around pre-conflict levels.

Ukraine's ability to export millions of tonnes of wheat through the corridor has been one element driving down prices.

Other factors include a record crop in major exporter Russia this year, the gloomy global economic outlook and a strong dollar.

But prices for wheat-based food staples such as bread and noodles remain well above pre-invasion levels in many developing countries despite the decline in Chicago futures, due to weak local currencies and higher energy prices which have raised costs such as transport and packaging.

WHAT ABOUT SEA MINES?

Russia and Ukraine accuse each other of planting the many naval mines that now float around the Black Sea. These pose a significant threat and were cited as the one thing feared by a crew member on the Sierra Leone-flagged Razoni, the first ship to pass through the corridor on Aug. 1.

The mines have drifted far from Ukraine's shores, with Romanian, Bulgarian and Turkish military diving teams defusing some that have ended up in their waters.

It could take months to clear them and there was not enough time to do so before the grains pact came into effect.

The Istanbul-based Joint Coordination Centre, which oversees the deal and is made up of Turkish, Russian, Ukrainian and U.N. officials, in August published procedures on the shipping channel, which aims to alleviate concerns of insurers and shipowners.

Insurers initially said they were willing to provide cover if there were arrangements for international navy escorts and a clear strategy to deal with sea mines.

Since then, they have created clauses for providing cover, including provisos that ships need to stay inside the corridor when transiting or risk invalidating their policies.

Following the July 22 agreement, Lloyd's of London insurer Ascot and broker Marsh MMC.N set up a marine cargo and war insurance facility for grain and food products moving out of Ukrainian Black Sea ports with $50 million cover per voyage.

The cost of overall insurance for ships sailing into Ukrainian ports - which includes separate segments of cover - is nevertheless likely to remain steep.

In September, Ukraine implemented a decree allowing its seafarers to leave the country despite wartime restrictions, a move aimed at freeing up vital manpower for both Ukrainian grain exports and the wider global shipping industry.

At the start of the conflict there were around 2,000 seafarers from all over the world stranded in Ukrainian ports. The International Chamber of Shipping association estimated that figure had fallen to some 346 mariners as of Oct. 27.

(Reporting by Nigel Hunt and Jonathan Saul in London and Pavel Polityuk in Kyiv, Editing by Angus MacSwan)