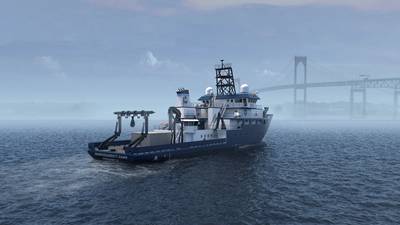 Graduate School of Oceanography Dean Paula S. Bontempi announced the name of the new $125 million vessel after a nationwide competition and approval from the NSF.

“Narragansett Dawn acknowledges the Indigenous peoples’ histories, ancestors, and perseverance in our communities today,” said URI President David M. Dooley. “It honors their stewardship of the land, sea and resources that they hold sacred, and that we strive to protect with our research and management strategies, together.”

In fall 2020, GSO, along with its academic partners and federal sponsors, invited the public to submit names for the under-construction vessel that honor individuals, communities or ideas that have furthered our understanding of the ocean, and whose recognition is long overdue. The competition generated 141 submissions—each name accompanied by a brief statement—from ocean science and exploration enthusiasts from across the United States.

Dean Bontempi formed a naming committee with members from GSO, URI, the local community, East Coast Oceanographic Consortium (ECOC) members, supporters and partnering institutions to establish an equitable and inclusive process for selecting a name for this new world-class vessel. The 18-member committee reviewed the suggestions with the Coastal Institute’s director, Judith Swift, who served as committee chair. The committee selected six finalist names, which were publicly announced in April 2021, and from those Dean Bontempi selected Narragansett Dawn as submitted by Bethany Jenkins, URI Professor of Cell and Molecular Biology with a joint appointment at GSO.

“I am proud to announce with our partners a name that celebrates GSO’s excellence in ocean research and honors our commitment to justice, diversity, equity, and inclusion,” said Dean Bontempi. “As GSO celebrates its 60th anniversary in 2021, we look forward to a new era of ocean exploration and discovery, and the dawn of a new future for ocean science.”

In 2018, NSF selected the ECOC, led by the University of Rhode Island, to operate the new $125 million oceanographic research ship, one of only three such vessels in the nation. The URI-led consortium includes the Woods Hole Oceanographic Institution and the University of New Hampshire School of Marine Science and Ocean Engineering along with numerous associate members.

Narragansett Dawn will support scientific studies such as monitoring ocean currents, seafloor surveys in earthquake-prone regions of the world, testing new technologies such as remote sampling platforms, tracking legacy and emerging ocean contaminants, conservation of marine resources such as fisheries, and food-web dynamics in the deep ocean. In addition, the ship will offer education and public engagement opportunities for teachers, undergraduate and graduate students and the public.

GSO will invite the name competition finalists, winner, any immediate family members (if finalists are minors), representatives of the Narragansett Tribal Nation, as well as the committee members to join Narragansett Dawn’s christening—tentatively scheduled for early 2023—at the Narragansett Bay Campus.

“I am grateful to all who took the time to suggest inspirational names for this research vessel, as well as the chair and members of the naming committee who worked tirelessly to select the competition finalists,” said Dean Bontempi. “With Narragansett Dawn, GSO and its partners will soon embark on a decades-long journey of pushing the boundaries of ocean exploration, research, management and education.”