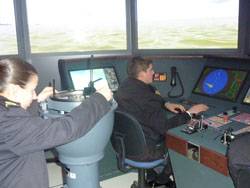 The Naval Academy of the Uruguay Navy has successfully completed the acquisition and installation of a simulator complex by Transas including navigation and maneuvering simulator NTPRO 5000, GMDSS Communications simulator TGS 5000 and Engine Room simulator ERS 5000 SOLO.
The project acquired through international bidding, with the participation of five world leading manufacturers culminated in the award of the contract to Transas USA and its local representative Arnaldo C. Castro SA. The new simulators replace the previous Transas simulators installed in 2000.
The Transas USA office for Latin America played a significant role in the purchase and installation process. Its sailors and engineers teamed up with the technical team of local representative, Arnold C. Castro SA which resulted in a system that according to Academy representatives exceeded their expectations, meeting deadlines and offering solutions required by projects of this scale.
The simulators are installed in a building specially renovated for this purpose, with an architectural design that enhances the realism and instructor control capabilities.
The navigation simulator consists of a Full Mission Bridge with seven visual channels on 50” plasma displays, and consoles equipped with the necessary hardware for maximum navigation realism in addition to radars, ECDIS, maneuvering and steering consoles, dedicated panels, VHF equipment, Aids to Navigation, dual and single telegraph for machinery control, bow thrusters, Z-Drive propulsion control, and a full GMDSS communications station, interconnected to GMDSS simulator TGS 5000.
Two Part-task mission bridges with three visual channels each on 42“ plasma displays provide additional training capabilities.
The system is specially designed to pratice pilotage operations on the Montevideo Port and Rio Uruguay, according to request of the National Port Administration authorities. To meet this requriement, the Rio de la Plata Exercise Area was developed. The area includes the ports of Montevideo, Buenos Aires and La Plata.
It is necessary to mention the quality of mathematical modelling of NTPRO 5000. The Naval Academy representatives confirm that ship models respond the same way as the real ones, reproducing highly realistic visual and sound scenarios in all weather conditions, wind, tide and current interactions with respect to the environment, docks and narrow channels.
The Naval Academy Director Captain Gabriel Vacarezza explains: “Transas simulators provide the Naval Academy with a powerful tool to form and train competent military and merchant marine seafarers, allowing them to navigate effectively, safely and protecting the environment”.
The Naval Academy is a public training center, secular and free, which is responsible for the preparation and training of uruguayan military and merchant marine people since 1907. Naval Academy supervises IMO Model Courses for seafarers, basing on its recognition as Training Centre of the International Maritime Organization.
Uruguay, a South American country with a privileged location between Argentina and Brazil, on the Atlantic Ocean  and  Rio de la Plat coasts, belongs to the select group of countries forming the IMO's White List, maintaining a constant concern to meet and exceed the standards set by that organization, belonging to United Nations Organization (ONU), so Naval Academy has  a quality management system ISO 9001:2008 certified since 2004 and has been subject to voluntary audits of the IMO and the European Maritime Safety Agency.
www.transasmarine.com