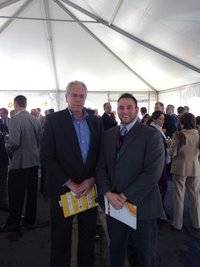 Crowley Maritime Corp.’s Miami-based subsidiary Customized Brokers recently cleared the first shipment of Uruguayan citrus to enter the U.S. in nearly 20 years, a major agricultural milestone made possible by the combined, dedicated efforts of the importer, USDA and Uruguayan Ministry of Agriculture and Fisheries.

To mark the historic occasion, Customized Brokers’ John Donohue, trade development specialist, joined the importer, U.S. agricultural representatives, Uruguayan dignitaries, and vested trade personnel at the Packer Avenue Marine Terminal in South Philadelphia to receive the shipment, which included four refrigerated containers of Valencia oranges – two of which Customized Brokers cleared through customs. These first four loads served as trial shipments ahead of the Uruguayan citrus season, which starts in May and runs through September.

“Taking part in a milestone such as this allows Customized Brokers to foster relationships with vested parties in the Uruguayan citrus program and expose them to the interrelated and complementary services Crowley is able to offer to perishables shippers throughout the Caribbean Basin and beyond,” said Donohue.

The importation finally came to fruition after the USDA’s Animal and Plant Health Inspection Services issued a new rule allowing the importation of several varieties of fresh citrus fruit, as well as citrus hybrids and the citrus-related genus Fortunella, from Uruguay into the continental United States as long as they adhere to strict sanitation and pest control guidelines.

It is estimated that the agreement between the two countries will enable Uruguay to export $20 million worth of citrus annually and will directly impact 15,000 Uruguayan citrus growers.

Though the first shipments were delivered to and distributed around the Northeast, the Florida Perishable Trades Coalition – a non-profit association cofounded by Crowley, Customized Brokers, Seaboard Marine and Port Miami, and developed to increase trade in perishable products through Florida’s air and seaports – is in the process of enhancing a recently announced pilot program that currently allows for the clearance of cold-treatment perishables, such as blueberries and grapes from Peru and Uraguay, through South Fla. as an alternative to congested Northeast ports. Previously, these perishables were required to enter Northeastern ports for cold treatment and clearance, but then had to be transported to southern states, such as Fla., for distribution in stores. Those who benefit from allowing these perishables to enter Fla. include shippers, who will see lower transportation costs and a longer shelf life for their products; southern-based consumers, who will see lower grocery store prices on these items; and the Florida economy, which will see a boost of business in locations such as Port Miami and Port Everglades. Additionally, environmental benefits from reduced emissions related to the transportation of these perishables will be seen.

If the pilot program goes well, the coalition anticipates that the trade lane will be opened permanently and new products will be allowed to enter the country on a regular basis.