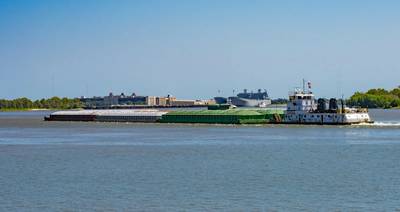 Commercial barge traffic on southern stretches of the Mississippi River was at a standstill on Tuesday as low water levels halted shipments of grain, fertilizer and other commodities on the critical waterway, shipping sources said.

The supply chain snarl comes just as harvesting of corn and soybeans, the largest U.S. cash crops, is ramping up and as tight global supplies and strong demand for food and fuel have sent inflation soaring.

Around 100 tow boats hauling some 1,600 barges were lined up for miles waiting to pass through one trouble spot near Lake Providence, Louisiana, that has been largely closed since late last week, shipping sources said.

At least two other sections of the lower Mississippi have also been closed at times, disrupting the flow of grain to U.S. Gulf Coast export terminals, where some 60% of U.S. corn, soybean and wheat exports exit the country, they said.

The U.S. Army Corps of Engineers is dredging the river to deepen the shipping channel to allow some cargo to pass. But shippers fear that without substantial rain the jam will persist well into the busiest grain export period of the year. Products such as road salt are also hauled north ahead of winter.

"Mother Nature hasn't been very helpful, and there's not a lot of relief in sight in the weather forecast," said Merritt Lane, president and chief executive of barge operator Canal Barge Company.

Shippers have been loading less cargo per barge so vessels sit higher on the water, and towing companies have reduced the number of barges per tow by nearly 40% as the low water conditions narrowed the navigable channel.

Many U.S. Gulf exporters have pulled offers for corn and soybeans loaded in October and November as it is unclear if they can source enough grain, threatening already sluggish export sales.