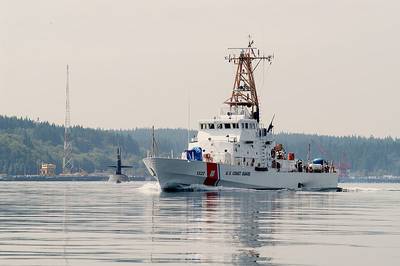 Built by Bollinger Shipyards in Lockport, La. and commissioned in 1988, the Cuttyhunk was the 22nd of 49 110-foot patrol boats built in support of the Coast Guard's maritime homeland security, migrant and drug interdiction, fisheries enforcement, and search and rescue missions. Cuttyhunk was named after Cuttyhunk Island, the site of the first English settlement in New England, located off the southern coast of Massachusetts.

Over the past 34 years of service, Cuttyhunk's crew conducted a wide range of operations. The cutter's crews completed over 1,000 operations ranging from law enforcement boardings to search and rescue responses throughout the Pacific Northwest. Cuttyhunk assisted U.S. Naval Base Kitsap Bangor in several submarine escorts before Coast Guard Maritime Force Protection Unit Bangor was established to ensure the safe transport of Ship Submersible Ballistic Submarines.

Nicknamed "The Pest of the West", Cuttyhunk assisted in one of the largest maritime drug seizures in the Pacific Northwest, near Cape Flattery, Wash., in December of 1997. More than 3,500 pounds of marijuana, estimated at a street value of $15 million, was recovered from the OK Jedi, a 60-foot sailboat with three people onboard.

"It has been an honor and privilege to serve alongside the final crew of Coast Guard Cutter Cuttyhunk," said Chief Warrant Officer Daniel Garver, Commanding Officer. "During my time on board, there have been many engineering challenges on our aging 110-foot ship, and I have witnessed the resiliency of our crew as they spent time away from families in selfless service to our country. I am grateful for the crew's dedication which echoes the hard work put forth by our predecessors during the cutter's 34 years of service."

Cuttyhunk's crew is scheduled to transit to Ketchikan, Alaska. There, the crew will spend several weeks preparing to bring Coast Guard Cutter Anacapa (WPB 1335) south to Port Angeles. Anacapa is also a 110-foot Island-class patrol boat, and was previously stationed in Petersburg, Alaska. She will be shifting homeports to Port Angeles to serve the Pacific Northwest. The Anacapa will be arriving after completing an overhaul in Ketchikan.