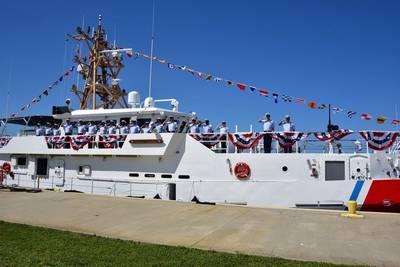 Crew members of the Coast Guard Cutter Pablo Valent man the ship during the commissioning ceremony at Coast Guard Sector St. Petersburg, Florida May 11, 2022. Pablo Valent, a Sentinel-class vessel, will be based in St. Petersburg and will operate throughout the Gulf of Mexico including the Florida Keys. (Photo: Ayla Hudson / U.S. Coast Guard)

The cutter’s namesake Pablo Valent was originally from Corpus Christi, Texas, and joined the United States Life-Saving Service in 1912. In September 1919, Valent helped rescue the crew of the hurricane-damaged schooner Cape Horn off the coast of Texas. For his heroic efforts, Valent received the Silver Lifesaving Medal and the Grand Cross of the American Cross of Honor Society. Valent was one of the first Hispanic Americans to receive these honors.

Built by Louisiana-based Bollinger Shipyards, the Valent is the 48th FRC and is the first to be homeported in St. Petersburg with missions including search and rescue, maritime law enforcement, coastal security, and living marine resources. There are 12 other FRCs in Florida, which operate throughout the Caribbean Sea.

Each cutter is designed for a crew of 24, has a range of 2,500 miles and is equipped for patrols up to five days. The FRCs are part of the Coast Guard’s overall fleet modernization initiative.

FRCs feature advanced command, control, communications, computers, intelligence, surveillance and reconnaissance equipment as well as over-the-horizon response boat deployment capability and improved habitability for the crew. The ships can reach speeds of 28 knots and are equipped to coordinate operations with partner agencies and long-range Coast Guard assets such as the Coast Guard’s National Security Cutters.