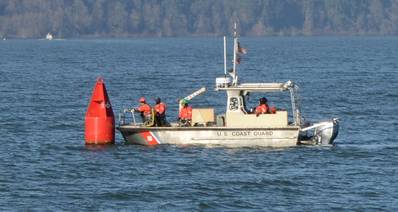 A U.S. Coast Guard vessel capsized on Saturday with four crew members aboard near Pier 39 in Astoria, Ore.

Four Coast Guardsmen were aboard the 26-foot Coast Guard Trailerable Aids to Navigation Boat conducting routine operations when the vessel reportedly encountered a series of heavy wakes that came over the bow, which resulted in an unrecoverable starboard list that capsized the vessel, the Coast Guard said.

At 12:09 p.m., crew members aboard the Columbia Bar Pilot vessel Connor Foss contacted the Coast Guard reporting they had recovered the four Coast Guardsmen from the water after responding to the UMIB and were en route to awaiting medical personnel at the 17th Street pier.

Clatsop County Sheriff Marine Unit assisted in the recovery by towing the capsized vessel to the 17th Street pier.

All persons involved are reported to be in healthy condition after being evaluated at Columbia Memorial Hospital, the Coast Guard said.

The Coast Guard is overseeing salvage operations and has initiated the mishap board review process.

Malta on Friday stopped passengers disembarking from the MSC Grandiosa cruise ship over a suspected case of COVID-19, Tourism…