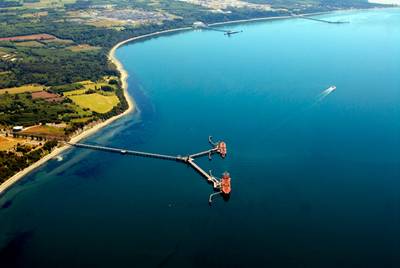 The U.S. Army Corps of Engineers will modify the Department of the Army permit for the BP Cherry Point Marine Terminal’s North Wing dock to ensure complies with the Magnuson Amendment’s restrictions regarding the handling of crude oil at Puget Sound facilities, and Endangered Species Act and other applicable legal requirements through additional permit conditions. This comes from the Record of Decision issued Monday, following completion of a Final Environmental Impact Statement released last August evaluating the potential impacts of the North Wing’s continued operation.

USACE will require BP to limit the volume of crude oil handled at the terminal to 191 million barrels per year and prohibit using the North Wing dock to handle crude oil unless authorized by USACE. Endangered Species Act-related permit conditions will require compliance with the NOAA Fisheries biological opinion, which imposes a limit on vessel calls to the terminal. USACE is also requiring BP to report the number of vessel calls and the volume of crude oil handled at the terminal each year to ensure compliance with both the biological opinion and the Magnuson Amendment. The 191 million barrels is the crude oil handling capacity calculated for the terminal as of October 18, 1977, the date the Magnuson Amendment went into effect.

The EIS examined the incremental environmental risk – principally from vessel traffic – of operating the North Wing of the BP Cherry Point Marine Terminal. Environmental risk was primarily measured in terms of vessel accidents and oil spills in the Puget Sound region. The purpose of the EIS was to provide decision-makers and the public with information on the incremental environmental risk—principally from vessel traffic—related to operation of the North Wing dock at the BP Cherry Point Marine Terminal.

Three alternatives were analyzed: the Proposed Action, No Action Alternative and Alternative A. The Proposed Action would modify the existing North Wing permit as necessary to comply with applicable laws and regulations and to uphold the public interest. The No Action Alternative would revoke the North Wing permit, potentially requiring removal of the previously authorized structure from waters of the United States. Alternative A could have left the permit in place as issued, with no additional conditions or restrictions.

USACE was directed by the Ninth Circuit Court of Appeals in 2005 to complete an EIS considering the impacts of reasonably foreseeable increases in vessel traffic due to the addition of the North Wing. The scoping phase was initiated in 2006. After conducting two long-term vessel traffic studies, USACE released the Draft EIS in 2014 for public review. The Final EIS was released in 2022, following the completion of Endangered Species Act consultations with NOAA Fisheries and the U.S. Fish and Wildlife Service.