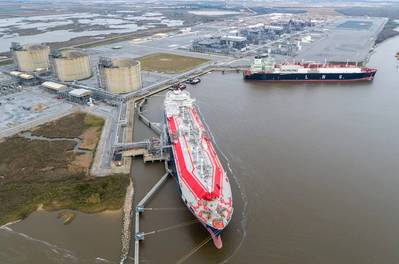 U.S. LNG exports to all destinations came to about 7.10 million tonnes (MT) last month, according to Refinitiv, down from a record high 7.67 MT in March.

Europe was the top importer of U.S. LNG for a fifth straight month, taking about 64% of U.S. exports, according to the data. European countries are slashing gas imports from Russia after its invasion of Ukraine. Moscow has threatened to cut supply to "unfriendly nations," and even cut flow to Bulgaria and Poland last week.

"Europe remains the dominant buyer of U.S. volumes," said Reid I'Anson, senior commodity analyst at Kpler. "That seems to be continuing into the shoulder months."

Eventually, operators will have to conduct maintenance or risk operational troubles during peak winter demand.

"The longer and harder these facilities run, which they have been for the last year, the more likely you're going to have issues pop up," said Ross Wyeno, lead analyst of Americas LNG Analytics at S&P Global Commodity Insights.

The United States is producing more LNG year-over-year because of additional capacity from Venture Global's new Calcasieu Pass LNG export terminal in Cameron Parish, Louisiana, as it ramps up.

About 13% of exports went to Asia and 2% to Latin America, data showed. About 21 vessels responsible for 21% of volumes had not signaled a destination.

Global prices have tapered off in recent weeks. The European LNG benchmark his week traded at $30 per million British thermal units (mmBtu), according to Refinitiv, compared with $39.22 per mmBtu for the same week in March.