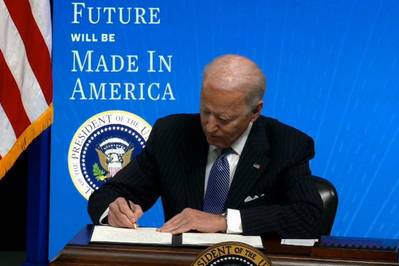 President Joe Biden signs the Strengthening "Buy American" Provisions, Ensuring Future of America is Made in America by All of America’s Workers executive order (Photo: The White House)

President Joe Biden on Monday signed an executive order aiming to use government spending to strengthen domestic manufacturing and create markets for new technologies, in a move widely praised by America's maritime industry.

The executive order, titled Strengthening "Buy American" Provisions, Ensuring Future of America is Made in America by All of America’s Workers", calls for increasing the amount of U.S. content that must be in a product for it to be considered made in America under existing "Buy American" requirements. It also makes procurement more transparent, and creates a senior White House role to oversee the process.

"The executive action I'm taking also reiterates my strong support for the Jones Act, American vessels and our ports, especially those important for America's clean energy future and the development of offshore renewable energy," Biden said as part of a speech moments before signing the order.

The order also recognizes the recent signing of the recently enacted National Defense Authorization Act (NDAA) as "an opportunity to invest in America’s workers as we build offshore renewable energy, in line with the President’s goals to build our clean energy future here in America."

The American maritime industry employs nearly 650,000 Americans and contributes $154 billion to the nation’s economic growth annually, AMP says. The 40,000 vessels that comprise the Jones Act fleet move nearly one billion tons of cargo annually – or roughly a quarter of the nation’s freight – along U.S. internal waterways, across the Great Lakes, and over the oceans to Hawaii, Alaska, Puerto Rico, and the U.S. territories, according to the trade group.

“The Jones Act represents multiple billions in private capital investment, sustains thousands of American jobs in the shipping, shipbuilding and service and supply sectors nationwide, and serves legitimate and lasting national security interests with vessels and skilled, reliable civilian American merchant mariners — assets the Department of Defense relies on for military support services in distant military emergencies,” said Paul Doell, National President, American Maritime Officers. “The Jones Act is in and of itself the ideal example of ‘Buy American’ in principle and in practice.”

“As the national trade association for the American tugboat, towboat and barge industry, The American Waterways Operators commends President Biden for reaffirming his strong support for the Jones Act in the opening days of his administration. The Jones Act is the foundation for every dollar AWO member companies invest in American-built vessels and every job they provide for Americans across the country. We look forward to working with the President and his team to strengthen the American maritime industry, which is crucial to our national, homeland and economic security,” said Jennifer Carpenter, President and CEO, The American Waterways Operators.

“We applaud President Biden and his administration for moving aggressively to grow the U.S. maritime industry. Working together we will put America on a road to recovery and prosperity,” said Tom Crowley, Chairman and CEO, Crowley Maritime Corporation.

“The Jones Act is one of the nation’s strongest ‘Buy American’ laws and when you support it, you support American maritime jobs, and the entire American maritime industry, which is a critical component of our national economy and security. We are very pleased to see the Biden Administration’s support of ‘Buy American’ and Jones Act policies with this Executive Order,” said Richard Balzano, CEO, Dredging Contractors of America.

“On behalf of all those that call the Mississippi River and its tributaries home, a staggering reach that encompasses over 40% of this great nation, the Associated Federal Pilots and Docking Masters of Louisiana thanks the Biden Administration for their support of the Jones Act – a key driver of job creation in our communities and pillar for national and homeland security,” said Greg Bush, President, The Federal Pilots of Louisiana.

“The success of the domestic maritime industry is enabled by the Jones Act, which allows Florida Maritime Partnership member organizations the ability to leverage innovative technologies, focused investments and dedicated trade routes to create a significant, positive economic impact to the markets we serve. President Biden has long been an ardent supporter of the Jones Act and we commend his Executive Order prioritizing ‘Buy American and recognizing the importance of the domestic maritime industry to U.S. economic, national and homeland security interests,” said Christopher Smith, President, Florida Maritime Partnership.

“Our Great Lakes maritime industry is buoyed by the incredible support from the White House and the Biden Administration making it known – in the first days in office – that they are fully committed to American Maritime, a backbone of our great country for more than a century. We share that same inspired commitment and are proud to be building a new ship for our U.S. flag fleet that will sail in 2022,” said Mark W. Barker, President, Interlake Maritime Services.

“We enthusiastically applaud this decision by President Biden to reaffirm his support for the Jones Act as a component of his Administration’s commitment to strong Buy America policies. His expression of support sends a clear message that the domestic maritime industry and the thousands of union men and women who build and operate these vessels are critical to the economic and military security of our nation,” said Captain Don Marcus, President, International Organization of Masters, Mates & Pilots.

“We look to be a leader on America’s path to a low carbon future, whether through new vessels to support offshore wind generation, or new low-carbon technologies to move America’s cargo. The unequivocal support of the administration reassures us as we contemplate these investments,” said David Grzebinski, CEO, Kirby Corporation.

“The White House has taken unprecedented action that supports the Great Lakes economy and homeland security.  This Executive Order creates jobs and protects the pilot light of the nation’s manufacturing base, which is the Great Lakes maritime industry,” said Jim Weakley, President, Lake Carriers’ Association.

“The Biden Administration’s strong support for the Jones Act recognizes the cornerstone of our American maritime policy, which has worked for over a century in strengthening our national and economic security. We applaud these early efforts and look forward to working with the President on creating future opportunities to support and grow the domestic maritime industry that generates numerous middle class, union jobs for the United States Merchant Marine,” said Adam Vokac, President, Marine Engineers’ Beneficial Association.

“Speaking for the 2,000 essential workers at Matson, who have worked through uncertainty and the daily realities of a pandemic to ensure that our most remote American communities and military installations in Hawaii, Alaska and Guam receive uninterrupted delivery of the food and supplies they need to sustain everyday life, hearing this support from the White House means a lot,” said Matt Cox, Chairman and CEO, Matson, Inc.  “Matson is a proud U.S. carrier with a long history of service to our country.  We take our role seriously and appreciate knowing that we have the support of the White House.”

“We applaud ‘Buy American’ as it recognizes our U.S. maritime workers who are committed to serving and securing our nation’s critical supply chains,” said George W. Pasha, IV of Pasha Hawaii and The Pasha Group.

“The Jones Act has been the bedrock foundation of America’s maritime policy for over 100 years, and has been supported by every Presidential administration since Woodrow Wilson signed it into law.  Given President Biden’s lifelong commitment to working families, we never doubted his support for the Jones Act and the hundreds of thousands of mariners and workers in related industries who depend on it for their livelihoods. We are especially pleased to see him make the Jones Act part of his first 100 days,” said Michael Sacco, President, Seafarers International Union.

“The ‘Buy American’ Executive Order issued today by President Biden will prioritize American innovation, ingenuity and craftsmanship that are pivotal to our national and economic security. Essential national and domestic security industries like the U.S. shipyard sector, and the maritime defense industrial base, will grow stronger because of the actions taken today, ensuring the future of America is made in America,” said Matthew Paxton, President, Shipbuilders Council of America.

“The swift issuance of this Executive Order emphasizing ‘Buy American’ is an affirmation of President Biden’s long-standing support of policies that promote the domestic maritime industry. We applaud this recognition of the important role our industry plays in supporting American jobs, contributing to the growth of our nation’s economy and meeting the needs of those we reliably serve,” said Tim Nolan, President and CEO, TOTE, LLC.

“We knew from his campaign statements and history that President Biden supported the Jones Act, but it is very encouraging to see it highlighted in an Executive Order during the first week of his presidency.  There is no precedent for this level of presidential support so early in an administration.  That’s great for Wisconsin, with its vibrant Jones Act shipping and shipbuilding industry,” said Mark Ruge, President, Wisconsin Domestic Maritime Coalition.