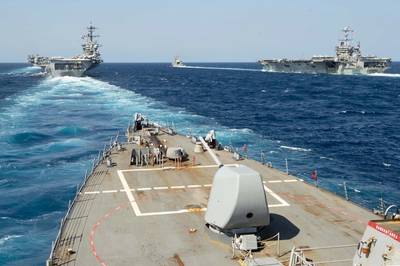 According to a blog by Rear Admiral Randy Crites posted on the Navy Live, the official blog site of the U.S. Navy, the Department of the Navy Fiscal Year 20 Budget request submitted to Congress is $205.6 billion, a 4.8% increase from the FY19 enacted budget. Specifics of the budget are focused on six specific dimensions:

The FY20 budget requests funding for more ships – as the navy continues to progress toward a 355-ship fleet – submarines, aircraft and people, and highlights include:

 The budget provides for a deployable battle force of 301 ships in FY20 including 11 aircraft carriers and 10 big deck amphibious ships that serve as the foundation of our carrier strike groups and amphibious ready groups.

In addition, the future Navy must be ready to meet a number of known and unknown asymmetric threats. To that end Research & Development funding increases this year by 9.5 percent from FY19 to FY20. To maintain our competitive advantage, this year’s budget increase targets the development of longer-range and hypersonic weapons, unmanned aircraft and vessels, artificial intelligence and additional capabilities aligned with the Future Force.