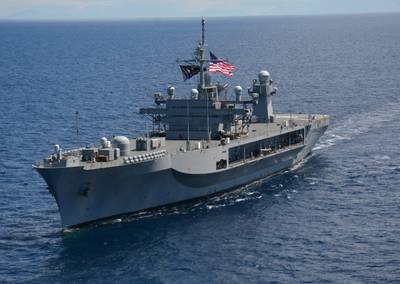 A U.S. naval command ship entered the Black Sea on Thursday as part of NATO maneuvers that drew a warm welcome from Ukraine but close scrutiny from the Russian navy.

The U.S. navy said the Mount Whitney was in the region to conduct routine maritime operations with NATO allies and partners. The Black Sea - in particular the area near the Crimean peninsula, which Russia annexed from Ukraine in 2014 - is a sensitive security zone for Moscow.

"The forces and means of the Black Sea Fleet have started monitoring the actions of the Mount Whitney command ship," TASS news agency quoted the Russian defense ministry as saying. President Vladimir Putin said on Monday that Russian forces would be able to observe Mount Whitney "through binoculars or in the crosshairs of (their) defense systems."

Russia, which severed ties with NATO last month, complains frequently about alliance activity close to its borders or in what it regards as its post-Soviet sphere of influence. But the show of U.S. military force was warmly received by Ukraine.

"Welcome, #USSMountWhitney. Ukraine has been calling for and strongly supports enhanced presence of our U.S. and NATO partners in the region," Ukrainian Foreign Minister Dmytro Kuleba said on Twitter.

"Additional 18,400 tons of diplomacy are surely helpful to this aim."

The ship's visit coincided with National Unity Day, a Russian public holiday which Putin pointedly marked by traveling to Crimea and giving a speech in which he said it was "now forever with Russia", drawing a sharp protest from Ukraine.