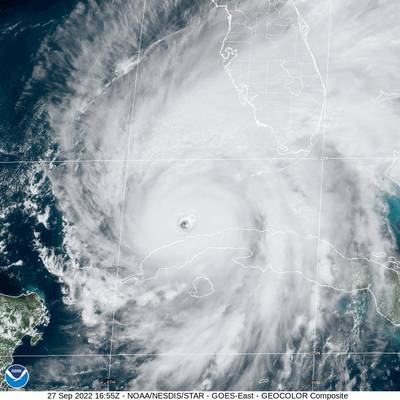 U.S. offshore oil producers on Tuesday were keeping a wary eye on Hurricane Ian's track as the powerful storm shut-in at least 480,000 barrels of oil production as it heads toward Florida.

The hurricane entered the U.S. Gulf of Mexico on Tuesday and is forecast to become a dangerous, Category 4 storm over the warm waters of the Gulf, according to National Hurricane Center (NHC) forecaster Eric Blake.

Ian weakened after crossing Cuba and was packing winds of 115 miles per hour (185 km per hour), the NHC said. It is heading toward making an extremely dangerous landfall in southwestern Florida, Blake predicted.

"The storm is so massive, it's going to affect all of Florida," said Jim Foerster, a consulting meteorologist at data and analytics firm DTN. "This is going to be really, really bad."

Ian will be "very impactful, not only to the offshore operations, but certainly, there will be tens of thousands of people without power over land," Foerster added.

Tampa Electric said it will proactively cut off service to customers and warned that they should be prepared for "extended power outages."

Offshore producers Chevron, BP, Occidental Petroleum and Hess on Monday said they had taken precautions ahead of the storm's arrival in the Gulf.

BP said it was working to redeploy offshore personnel to two offshore production platforms after determining Hurricane Ian no longer posed a significant threat to its Gulf Of Mexico assets. The oil major had on Monday evacuated personnel and halted output at Na Kika and Thunder Horse platforms that together pump up to 380,000 barrels of oil per day (bpd).

Occidental and Hess said they were implementing storm procedures without providing specifics.