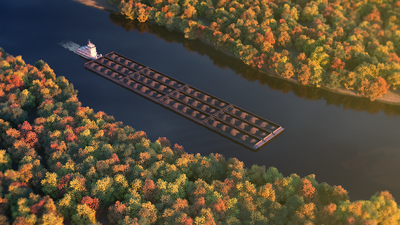 U.S. soybean exporters are facing what may be their busiest and most logistically challenging summer due to an unprecedented backlog of soybeans purchased by China that still needs to be shipped and widespread floods in the U.S. Midwest.

While there is little hope for a prompt U.S.-China trade deal, some 7 million tonnes of U.S. soybeans bought before talks broke down last month will need to be delivered to Beijing in coming months, U.S. exporters and industry analysts said.

China would face steep penalties if it tried to cancel the orders and, as the world's top soy importer, it still needs the soybeans, traders said. Cancellations of deals made during trade talks earlier this year could also escalate diplomatic tensions.

"You have a contractual obligation so you're going to need a mutually agreed-upon cancellation price or it would be considered default," said a U.S.-based soy exporter who asked not to be named.

Cancellation costs would vary from seller to seller and could range from hundreds of thousands to millions of dollars per cargo, depending on how cheaply and easily the exporter can exit grain hedges and freight commitments made when the initial purchase was made.

Chinese importers and U.S. exporters could instead try to renegotiate contracts for delivery after September as the next U.S. harvest gets underway. Otherwise, U.S. exporters still facing flood-related shipping delays may seek to declare force majeure, traders said.

Delaying shipments to China until after the harvest would swell U.S. soy stocks and push down prices, prolonging the financial pain on the U.S. farm sector.

U.S. soybean stockpiles hit record highs this year as sales to China fell to the lowest level in 16 years after Beijing imposed steep tariffs on U.S. shipments in retaliation for U.S. duties on Chinese goods.

Chinese state-owned firms bought millions of tonnes of U.S. soybeans in six waves of goodwill purchases from December to March, when hopes for a trade deal were high. The firms typically bought more than 2 million tonnes at a time from global grain traders.

The final two tranches of purchases on March 7 and March 28, totaling at least 4 million tonnes for shipment from June to September, were part of a 10-million-tonne purchase commitment made by Chinese negotiators during trade talks in Washington.

Rising U.S. soybean export prices discouraged China from signing deals for the rest of the purchase commitments before trade talks collapsed in May, one export broker said. With relations deteriorating, additional purchases are not expected anytime soon.

U.S. exporters have been loading an average of 4 to 5 China-bound cargo vessels a week since January, and that pace is expected to begin ramping up this month as Chinese purchases booked in March begin to ship.

HISTORIC FLOODING
U.S. exporters would need to load some 2.3 million tonnes of soybeans per month through August to China ahead of the next U.S. harvest to meet their commitments.

Over the past decade, U.S. soybean exports to all destinations have averaged about 1.5 million tonnes a month in June, July and August, according to U.S. government data. Chinese shipments have been less than 400,000 tonnes.

Adding to the challenge, historic flooding on the Mississippi River has impeded operations at the largest U.S. grain shipping port in New Orleans and made supplies from big sections of the Midwest farm belt largely inaccessible.

At least eight bulk cargo vessels were loading or waiting to load with China-bound soy at three of the Gulf Coast's large export terminals last week, according to a vessel lineup seen by Reuters.

The northern hemisphere summer is typically the slow season for U.S. soybean exporters as South American soybeans are readily available for export. More than three-quarters of all shipments normally depart the United States after the harvest, from October and February.

"The clock is ticking, if they have to ship everything before August, and logistics are not helping ... probably delivery can't be made on time," said a senior soybean trader in Beijing.