US, UK Navies Conduct Antisubmarine Drills in the Arctic 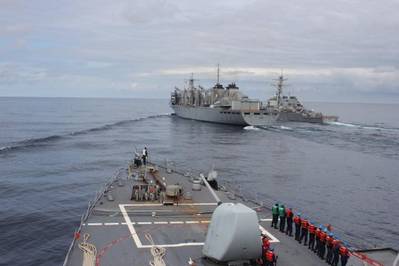 U.S. 6th Fleet (C6F) conducted a bilateral naval anti-submarine warfare (ASW) exercise with the U.K., above the Arctic Circle, May 1, 2020.

Four ships from two nations, a U.S. submarine, and a U.S. P8-A worked together, in the Norwegian Sea, to conduct training in the challenging conditions in the Arctic.

"For more than 70 years, 6th Fleet has operated forces across the region in support of maritime security and stability. Our regional alliances remain strong because of our regular operations and exercises with partner navies, and we welcome this opportunity to work collaboratively at sea, while enhancing our understanding of Arctic operations," said Vice Adm. Lisa Franchetti, commander, U.S. 6th Fleet.

"We are working with our partners to enhance our combined capabilities as we conduct maritime security operations and training in the Arctic region," said Franchetti. "Our ships must be prepared to operate across all mission sets, even in the most unforgiving environments. This is especially critical in the Arctic, where the austere weather environment demands constant vigilance and practice."

"One of the best attributes of our surface force is that we can aggregate at will, transitioning seamlessly from independent ships to coordinated operations," said Capt. Joseph A. Gagliano, Commander, Task Force 65, commander, Destroyer Squadron 60.  "Our interoperability with our allies is so good that we can deploy multinational naval forces with minimal notice. That's the real power of NATO."

Since early Spring 2020, American consumers have received a practical education in supply chain operations. One lesson is…