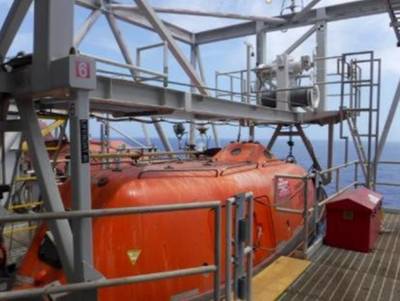 A U.S. Coast Guard investigation into a fatal lifeboat drill accident has resulted in 10 safety and eight administrative recommendations, the agency announced.

In July 2019, two people were killed and another was injured while testing lifeboats at Shell's Auger tension leg platform (TLP) in the deepwater U.S. Gulf of Mexico, about 210 miles southwest of New Orleans. The incident occurred during a routine abandon ship drill and involved the inadvertent release of the lifeboat as it was being recovered by the Auger.

A formal investigation recently completed by Coast Guard District Eight found the most significant factor was the degradation and failure of the lifeboat's aft release cable.

A series of safety and administrative recommendations from the Coast Guard include proposed changes to lifeboat equipment requirements and regulations, including potential changes to type approval, testing and drill procedures. They can be found here.