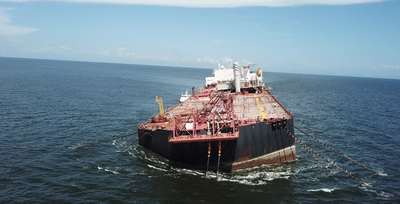 Venezuelan state oil company Petroleos de Venezuela has begun transferring crude off of an offshore oil facility where governments in two neighboring countries have voiced concerns about a potential spill, two people familiar with the matter said on Tuesday.

The company this week began the first of several transfers from the Nabarima floating storage and offloading facility (FSO), anchored in the Corocoro oilfield off Venezuela's eastern coast, onto the Inmaculada barge, said the people, who spoke on the condition of anonymity because they were not authorized to speak publicly.

The Inmaculada will ferry the crude onto PDVSA's Icaro tanker, a process expected to take weeks, the people said. Refinitiv Eikon tracking data show the Icaro navigated toward the Nabarima on Tuesday morning and anchored nearby in the Gulf of Paria.

PDVSA did not immediately respond to a request for comment. The company has previously dismissed concerns by environmental groups and the governments of neighboring Trinidad and Tobago and Brazil that the facility could be prone to a spill.

The Nabarima is holding some 1.3 million barrels of crude, and images of the facility listing in September and October raised alarms about a potential spill. PDVSA corrected its tilt and said the vessel, part of the Petrosucre joint venture with Italy's ENI SpA was in satisfactory condition.

PDVSA has suffered for years through cash flow shortages during an economic crisis that has led OPEC-member Venezuela to neglect maintenance of infrastructure. More recently, U.S. sanctions on the company aimed to oust Venezuelan President Nicolas Maduro have hindered operations.

PDVSA, which holds a controlling 74% stake in Petrosucre, had initially planned to begin the discharge in early December, according to a third person familiar with the matter.

Authorities from neighboring Trinidad and Tobago toured the vessel in October. They said that while they were satisfied the Nabarima was in stable condition, the offloading process posed risks.