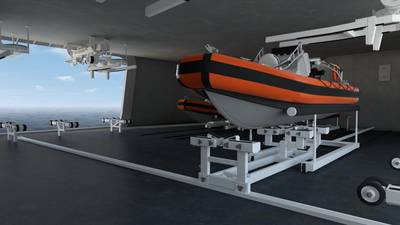 Norway-based boat handling system and specialized davit supplier Vestdavit has designed a new multiple-boat handling system which aims to make boat handling safer and simpler in the hangars and mission bays of warships, seismic craft and expedition yachts. The MissionEase system can stow, launch and retrieve up to seven different RIBS, daughter boats and USVs in high seas from within a protected hangar.
Atle Kalve, Development Director, Vestdavit, said, “MissionEase is simpler, quicker, safer and cheaper than any boat handling system available. It brings together all our experience with naval and seismic ships to make the best use of a hangar or mission bay.”
MissionEase works on a system of hydraulic cradles which moves boats safely from stowage positions to maintenance, preparation or launch areas of the mission bay. It links seamlessly with dual or single-point davits to deploy or recover boats in high seas from either side of the vessel.
Kalve explained, “The ability to deploy and recover boats safely is part of the main armament of today’s warships, and critical to seismic work and for expedition cruise ships and yachts. A midships hangar or mission bay allows the boats to be stored, maintained, prepared and launched from a safe environment with a dry, high freeboard. But existing systems rely on overhead gantries to move the boats within the bay. When the ship is moving that is dangerous, and slinging and unslinging takes time. MissionEase allows the boats to be moved safely and quickly within the bay on the cradles, even in high seas or with a list on the vessel. The boats are fed directly to the davits for launch, or feed directly back into the stow when recovered.”
In addition to a range of types and sizes of boats and Unmanned Surface Vehicles MissionEase will also handle standard TEU containers for stores and armament when the vessel is in port.
Vestdavit said it is patenting the multi-cradle apparatus at the heart of the MissionEase system and is in discussions with major navies about fitting it to the next generation of warships.