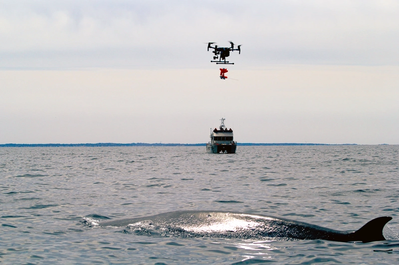 BOEM said that the collected data would shed important light on the whales’ acoustic behavior, which researchers will use to inform mitigation strategies – including passive acoustic monitoring – to protect this endangered species from the potential impacts of offshore wind energy activities.

"Very little is known about the sei whale, which is one of the most endangered large whales in the North Atlantic. Understanding how the whales behave and use their habitat is critical for BOEM to assess potential impacts resulting from bureau-permitted offshore activities and ensure responsible offshore wind energy development," BOEM said.

According to BOEM, digital acoustic tagging is a component of a larger BOEM study into the Spatial and Acoustic Behavior of Endangered Large Whales to address gaps in information on a variety of endangered large whale species – including sei, North Atlantic right, and fin whales – to better inform offshore wind energy area selection. UAVs enable researchers to target specific animals in a group or conduct multi-group taggings, and the collected data will also aid in conservation efforts.

“The use of UAVs to tag whales is the first major innovation related to attaching tags to whales,” said Dr. David Wiley, research ecologist at Stellwagen Bank National Marine Sanctuary.