Ocean explorer and scientist Dr. Robert D. Ballard opens up on his personal life and his world-famous ocean discoveries like never before in his new book, “Into the Deep.” Best known as ‘the man who found the Titanic,’ Marine Technology Reporter had the opportunity to interview Ballard on the contents of the book, a book released yesterday with a follow-up National Geographic television special scheduled for June 14, 2021, taking a deep dive into his dyslexia, the importance of his family throughout his career, and reflections on what’s important – and what is not –in life and in a career spanning 62 years, 157 (soon to be 158) expeditions and the long list of ‘world first’ deep ocean discoveries under his command.

At the age of 78, Robert D. Ballard is and always will be a scientist, an ocean explorer intrigued by finding clues to the unknown. Currently engaged in a $100m program with NOAA's Office of Ocean Exploration to map and characterize the US EEZ, a project which teams his ocean exploration trust with Woods Hole, the University of Rhode Island, the University of New Hampshire and the University of Southern Mississippi, Ballard has not been on the sea for nearly two years due to COVID.

But Ballard – the author of multiple books, papers and articles, the subject of TV and film – took the time to take a different path of discovery and reflection, into not just his career but also his personal life.

“I wrote a book, Eternal Darkness, with Princeton Press, and it got a really good review from the New York Times. But then they said, ‘I didn't learn a thing about the person,’” said Ballard. “So this is a very personal book, and it also talks about parts of my life that I even at the time I wasn't aware of.” 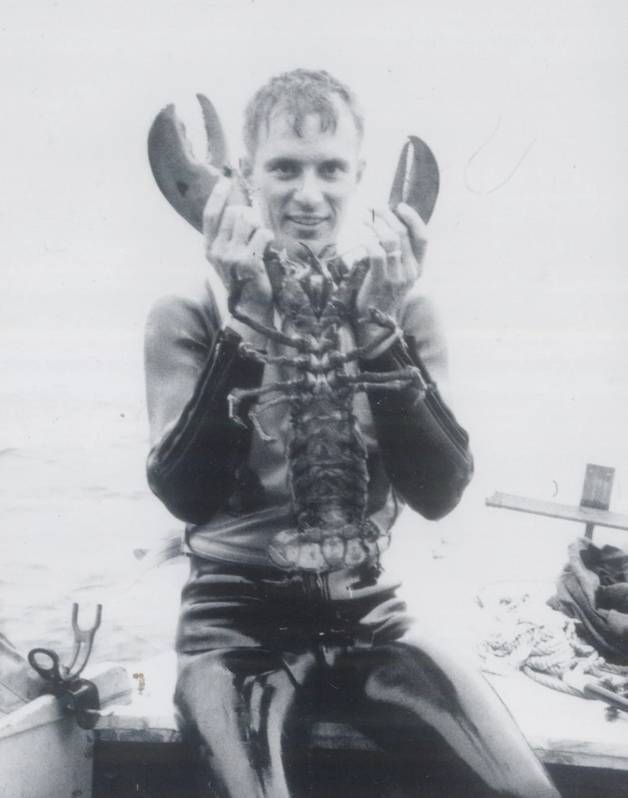 Born in Kansas yet a California kid, I still found myself right at home with the Boston Sea Rovers during our annual lobster dives. (Photo Courtesy of Robert Ballard)

“The Gift of Dyslexia”

“I learned through my daughter that I'm dyslexic like her, and that was quite an awakening,” said Ballard. “And I thought, maybe this is time to talk about being dyslexic.”

Following in the footsteps of his “super brilliant, non dyslexic older brother” Richard – who Ballard admits that even now is the smartest human being he’s ever met – was a challenge for Ballard, particularly when he shared the same teachers.

“I had A's and B's, but there's a huge difference between an A minus and my brother's A plus, and that's because I learn differently,” said Ballard. “I wanted to talk about that, because I view it as a gift. And most kids that are dyslexic won't talk about it and feel they've been told they're stupid. And I really want to reach out to that audience to say no, you're not. You're following a path where the rules were written by non-dyslexics. And I want to tell you about the path I went down to success, where I was able to take advantage of the gift of dyslexia.”

“I didn't know I was dyslexic until I read the book The Dyslexic Advantage. I remember when I read the book … slowly … I cried because it explained me to me for the first time,” said Ballard. “And now I've really embraced it. And I realize why I was able to do what I've been able to do, because I'm such a vigil creature. I can imagine things in my mind, and it's perfect when I go down to the darkest depths, I look at my sensor systems and I can form a mental image in a world of eternal darkness. I think it explains how I tick.”

As Ballard gets closer to his 80th birthday, he has become more reflective on the balance of personal and work. “Two years ago I was in a Redwood forest and a brilliant professor from Harvard, Arthur Brooks, talked about how to stay happy while you grow old,” essentially three things you need to do, said Ballard. First on the list is developing closer bonds with friends, which Ballard has done spending more time “hunting and fishing” rather than academic and professional projects. Second is mentoring the next generation, which led to Ballard hiring a team to help manage his activities across his military, academic, popular science and business endeavors. The third piece of advice has been a bit more difficult for Ballard to enact, as he said with a laugh: “The third thing is the one I'm having a little difficulty with: ‘The next time a big project comes along, say no!’ I've never said no. So I'm struggling with that one, and you'll have to check back in and see how I do it.” 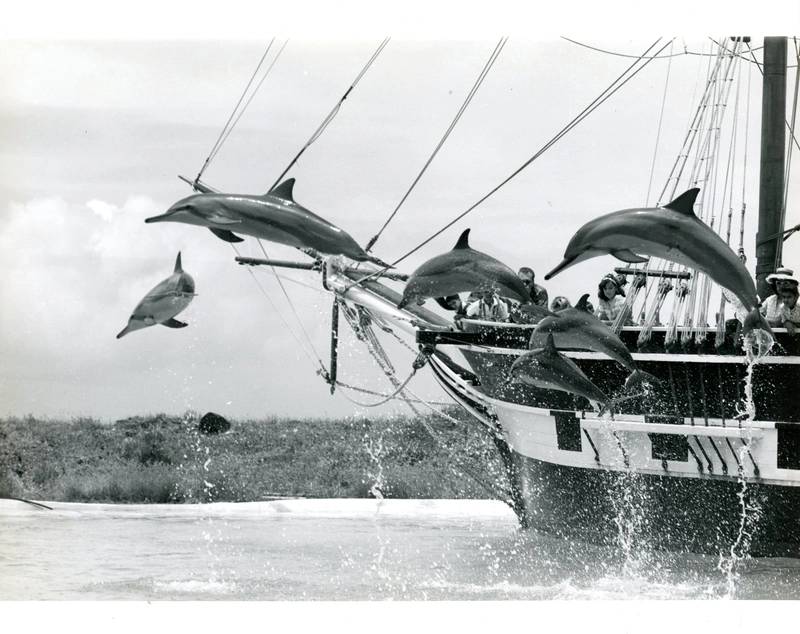 For my job as a dolphin trainer at Hawaii's Sea Life Park, 1965–66, I had two responsibilities. Some days we put on a show (above), but other days we conducted research on dolphin behavior (opposite). It was a great job for someone who loved being in and around the ocean. (Photo Courtesy of Robert Ballard)

Ballard counts his mom – who recently passed away at the age of 98, having cared for his handicapped sister her entire adult life – as his most influential mentor in his life. “I had a tough time; it was not easy to get where I got, and she was always the person that picked me up when I fell down.” She was also the one who would help keep Ballard solidly grounded. Upon watching all of the international media hoopla surrounding his discovery of the Titanic, she congratulated him but said: "Too bad you found that rusty old boat, because you're a good scientist and now they're only going to remember you for finding that boat."

Mentoring has, and continues to be vitally important to Ballard, a lesson learned at an early age. As a boy growing up in Southern California, he had the opportunity to meet Scripps Oceanography Director Roger Revelle who is widely regarded for not only establishing the institution as an internationally prominent science center, but for solidifying the decades-long relationship between Scripps Oceanography and the U.S. Navy. Revelle served as an oceanographer for the U.S. Navy during World War II and was instrumental in the founding of the Office of Naval Research. Revelle worked at Scripps Oceanography before and after the war and served as its director from 1950 to 1964.

“When I met with Roger Revelle, he said oceanography is not something you take in undergraduate, that's a graduate program,” said Ballard. “He said ‘you really need to ground yourself in a basic science first.”

Taking his advice to the extreme, Ballard enrolled at UC Santa Barbara with quadruple major in chemistry and geology, with minors in physics and mathematics. “So I sort of became a Swiss army knife, master of nothing but pretty good at a lot of things. Today you don't get a job and retire and get a gold watch. You go through multiple evolutions. And I've been able to recast myself multiple times because I've had that really strong, broad based experience in math, physics, chemistry, and geology. So I'd say get a really broad base in the sciences.” 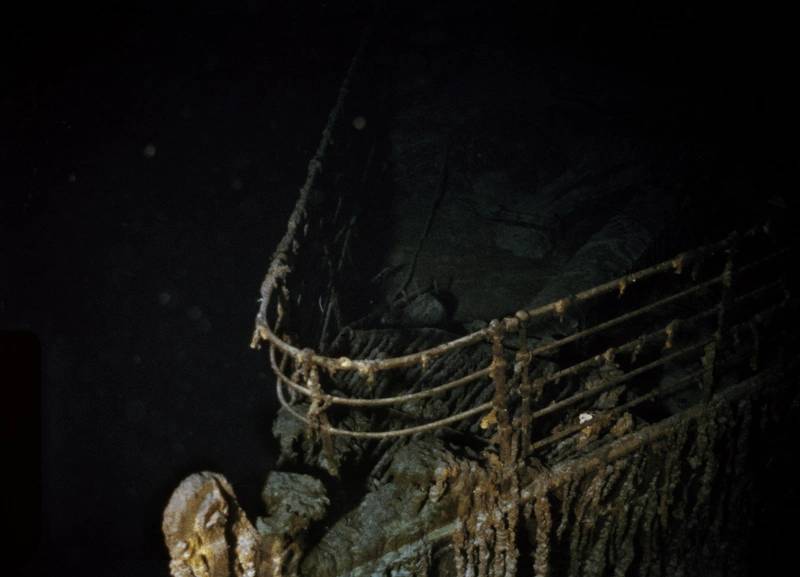 Returning to Titanic a year later, 1986, with Alvin and JJ, along with much better cameras, we photographed every inch of the wreck, including the bow. (Robert Ballard and Martin Bowen/Woods Hole Oceanographic Institution (WHOI))

Beyond “That Rusty Old Boat”

The list of discoveries under Ballard’s command is long and distinguished, and while the discovery of Titanic was his most acclaimed among the general population, it’s not his favorite. “Everyone wants me to say Titanic. I like to say, ‘Kids, my favorite discovery is the one I'm about to make,’ because rumors of my death are greatly exaggerated.’”

In fact, he has two favorite discoveries, but he calls the discovery of hydrothermal vents – Black Smokers – as the show-stopper.

“That rewrote the biology book, that was clearly one of the most significant discoveries ever made in the ocean,” said Ballard. “Discovering hydrothermal vents and life system completely opened up prospecting for life throughout the universe and even within our own solar system.”
Another favorite was the discovery of perfectly preserved ancient shipwrecks in the anoxic bottom waters of the Black Sea. “That was another home run,” said Ballard.

While Ballard has spent much time at sea, on and below the waters, he sees the future generation ‘exploring’ the oceans from the comforts of their own offices, labs and homes. Specifically, he sees the evolution of telepresence technology and autonomous systems as working collaboratively to help future scientists and explorers learn even more about what lies in the ocean.

“Now with the use of AUVs and autonomous surface vehicles, we have a whole cadre of tools we're using; we call them force multipliers … it’s going to be autonomous everything,” said Ballard. “I don't expect humans to go to sea much (in the future). I mean, I love horseback riding, but I don't ride a horse to work. We're going to be very much in the world of more and more intelligent autonomous vehicles.” 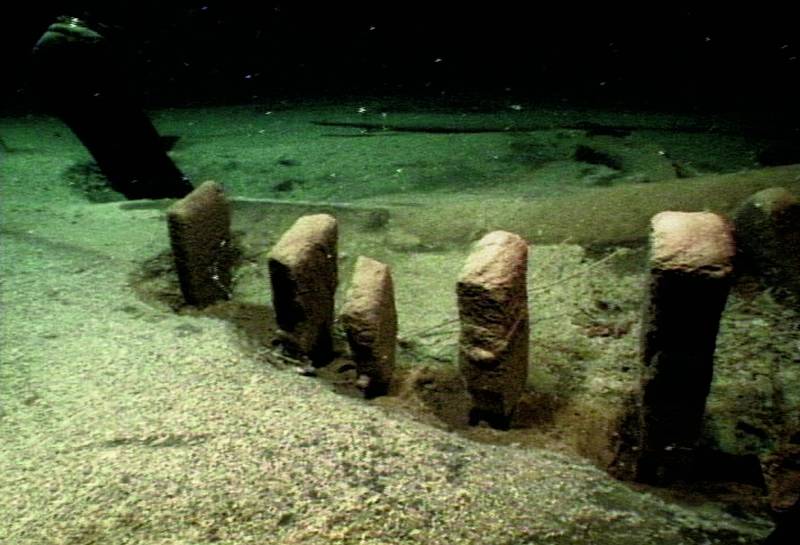 Our explorations in the Black Sea in 2000 revealed, among many other things, a perfectly preserved ship. The ribs of it hull protruded from the ocean floor. (Martin Bowen/WHOI and IFE)