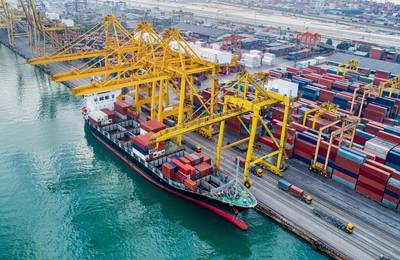 While drama in the container shipping sector has calmed a bit, container carriers still wrestle with unexpected drops in demand. Peter Sand, Xeneta, discusses vessel capacity moves and their likely impact on rates, as well as the first containership sent to the ship scrap yard in more than 18 months.

Q: Peter, the last time that we spoke, you were succinct in saying that this market is a mess, with spot rates plunging in what traditionally is the busiest shipping season in the US. Has that picture changed in the last few weeks?

Has it changed from being a mess? Not really. But at least I think some of the drama that we have seen over the past three months or so is calming to some extent. If you go into our (Xeneta) platform, you can easily spot the difference between rates (today) and where they were a month ago, or three month ago. There you can easily see that rates have been dramatically down in what's normally the peak season; where you would expect things to heat up and where you would expect capacity to be tight.

Q: The supply and demand on the freight side is one thing, but capacity deployment and management by the carriers is another factor in the rate equation.Can you tell us what are carriers doing today to manage that capacity? And how has it, or will it, impact freight rates?

I think at the face of it's easy to call out the carriers for acting too late and by cutting capacity too little. But if we go a little bit deeper, we can see that carriers (on the key trans-Pacific trade), where carriers have cut capacity by some 11% when compared to the same three months last year (August to October). Carriers try all the time to balance their networks to meet demand.

Going into the peak season, we were all a little puzzled, especially on the US side of things, because despite the headwinds from inflation --  which fortunately seems to be calming down a little bit. In the face of that, American consumers kept on buying. It's fair to assume that that carriers were betting a little bit too much on those consumers to stay greedy, to get those goods in as fast as possible. But we can also now, in hindsight, clearly see that the spot rates down (74%) on the Pacific from earlier in the year is a testament to the fact that that consumers are shying back now.

Carriers had too much capacity on those trades, and they're now finding new homes for those ships into South America, for instance, (as well as) trans-Atlantic.

Q: When you look at the container shipping market in the whole, where do you, from the carrier side, see strengths and weaknesses?

I see a little bit of strength now with the first container ship being demolished in more than one and a half years. It's a tiny ship, 32-year-old, 1,248-box ship. But that's the strength carriers have to a certain degree. Their destiny is in their hands if they just get rid of a lot of the (older ships, particularly) with a lot of new ships being fed into the market in '23, '24 and '25. It may ease the pain if they get about the business of demolishing some of those ships (that may be tricky to keep running to comply with IMO regulations anyway).

In terms of weakness, (carriers look) back now at (what were) super strong spot markets. Now they need to revamp their business to watch a different environment going forward, one where the number of boxes being transported will fall on most trades. They need to re-establish key relationship to freight forwarders, to major shippers that they need for a sustainable business going forward. I think that is the number one agenda item for all carriers right: re-establish that vital relationship with your customers going forward as they face significant headwinds from the market fundamentals heading into 2023 and 2024.

Large vessels are required to have extra tug assistance due to tunnel construction work in the Scheur, the Port of Rotterdam…