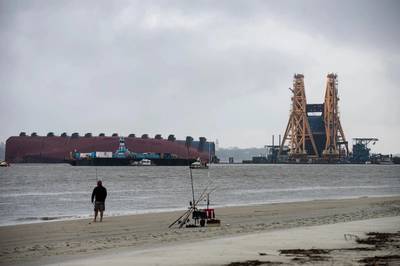 Salvors finished cutting and lifting the first section of the capsized car carrier Golden Ray on Sunday, and the section was carried by barge to a local site for further sea fastening before transport to Louisiana for recycling.

Delays during the first round of cutting operations, including those caused by a passing tropical storm and equipment issues, are among a string of setbacks to impact one of America's most complex salvage projects. But the response team hopes that lessons learned along the way will help to streamline the work ahead.

“This is our first major milestone in the removal operation. We validated the overall removal method while we continue to refine our strategies to increase the efficiency of the next six cuts,” said Commander Efren Lopez, U.S. Coast Guard Federal On-Scene Coordinator.

After cutting and lifting, the bow section was secured to the barge Julie B, which is equipped with pollution mitigation and self-containment capabilities. The massive piece of the overturned RoRo vessel was transported from the wreck site in St. Simons Sound to a nearby site for further sea fastening before transit to Louisiana for recycling.

Meanwhile, preparations for the second cut have begun as environmental monitoring continues. The wreck will be removed in a total of eight sections using the specialized heavy lift crane vessel VB 10,000.

“Responders on the shore and on the water have vigilantly kept watch for and responded to any environmental impacts. We encourage the public to continue reporting any debris they encounter through the Debris Reporting Hotline and online form.” Lopez said.