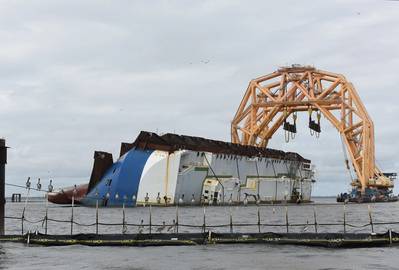 The heavy-lift vessel VB 10,000 arrived Tuesday at the Golden Ray wreck site in Georgia's St. Simons Sound, where the specialized vessel will be used by salvage crews to cut and lift sections of the overturned car carrier.

The Korean-owned Golden Ray, which capsized after leaving the Port of Brunswick in September 2019, will be dismantled in place and removed in sections. Salvors have installed 16 lifting lugs on the wreck to provide connection points for the U.S.-flagged VB 10,000, which has two 255-foot tall gantries that will use lengths of chain to cut the RoRo vessel into eight pieces and lift them onto barges for transportation to Gibson, La. for recycling. Sections containing cars will be unloaded in a drydock near the wreck site prior to being transported to Louisiana.

“The arrival of the VB 10,000 has been highly anticipated. It’s a very capable asset implementing the latest in heavy-lifting technology for marine environments,” said Cmdr. Efren Lopez, Federal On-Scene Coordinator. “The vessel is a critical component to our removal plan that ensures the safety of our responders and the public as we move forward and remove the Golden Ray.”

The U.S. flagged VB 10,000 is expected to remain on site for a minimum of eight weeks, plus any extra time required for weather stoppages or other unforeseen circumstances, Michael Himes, public information officer for the St. Simons Sound Incident Response told MarineLink.

Throughout the cutting and lifting operations, Versabar's VB 10,000 team of roughly 50 crew members will be sequestered at a local lodging area, Himes said. The response team said it set up the health safety “bubble” to mitigate coronavirus exposure and ensure responder safety during removal operations. 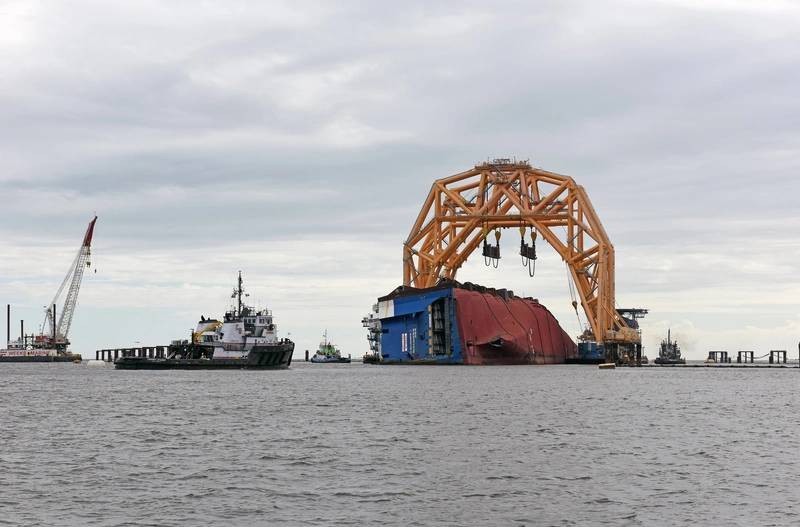 Put into service in October 2010, the VB 10,000, is the largest lift vessel ever built in the U.S., previously used for a number of offshore decommissioning and installation projects in the Gulf of Mexico. The vessel boats a 7,500-ton lift capacity, and its fully automated dynamic positioning system (DP3) consists of four 1,000-horsepower retractable thrusters in each of the two barges. (Photo: Michael Himes / St. Simons Sound Incident Response / U.S. Coast Guard)

The response team has established a 150-yard safety zone around the Golden Ray's environmental protection barrier (EPB), and it is advising mariners and to steer clear of the wreck site.

The Golden Ray wreck remains stable and is being monitored continuously by sensors and during hydrographic surveys around the EPB. An environmental unit and pollution response teams continue to monitor the shoreline and wreck site, reporting no emergent environmental concerns.

The salvage project, one of the largest and most complex in U.S. history, has encountered a number of delays relating to difficult environmental conditions, a COVID-19 outbreak among crew and most recently mooring system adjustments for the VB 10,000.