Huntington Ingalls Industries' Newport News Shipbuilding division lifted the upper bow section onto one of the new aircraft carrier being built for the U.S. Navy, signalling the completion of the ship's flight deck.

The addition of the upper bow section is one of the last steel structural units, known as a superlift, to be placed on the newbuiild, John F. Kennedy (CVN 79). Weighing 780 tons, the superlift took 18 months to build. It was constructed using digital technology, such as visual work instructions to install piping in the upper bow on the final assembly platen instead of on the ship.

“We are very pleased with the progress being made on Kennedy as we inch closer to christening the ship later this year,” said Mike Butler, Newport News’ CVN 79 program director. “The upper bow is the last superlift that completes the ship’s primary hull. This milestone is testament to the significant build strategy changes we have made—and to the men and women of Newport News Shipbuilding who do what no one else in the world can do.”

Huntington Ingalls Industries says it is using transformative construction methods and the latest industrial technology to improve the way the ship is being built. The Kennedy build strategy includes the increased use of digital tools to build superlifts that are much larger and more complete at ship erect than on prior carriers.

Leveraging lessons learned and key build strategy changes, Kennedy is on track to be built with considerably fewer man-hours than the first ship in its class, Gerald R. Ford. More than 3,200 shipbuilders and 2,000 suppliers from across the country are supporting the construction of Kennedy.

The ship is in the early stages of its testing program and is on schedule to launch during the fourth quarter. The christening is planned for late 2019. 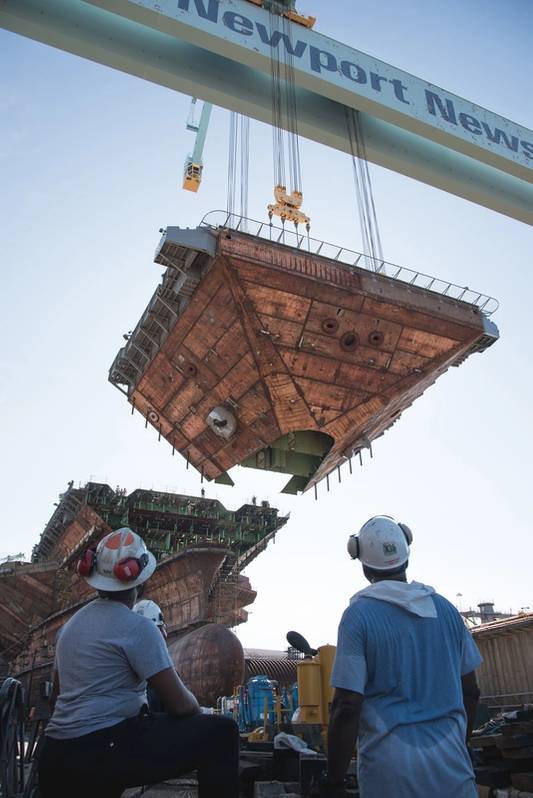 The upper bow unit of the nuclear-powered aircraft carrier John F. Kennedy (CVN 79) is the last superlift that completes the primary structure of the ship. (Photo by Matt Hildreth/HII)