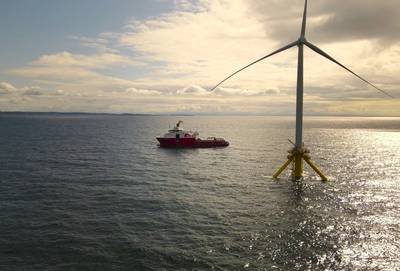 The TetraSpar Demo project is developed by Stiesdal Offshore Technology, TEPCO Renewable Power, Shell, and RWE and has been described as the world’s first full-scale demonstration of an industrialized offshore foundation.

The TetraSpar foundation concept is the modular “building block” arrangement: each foundation is assembled from tubular steel modules, most of which are common to all configurations. Manufacturing takes place in factories using industrialized methods, and their assembly near the site as well as towing are measured in days or weeks, instead of months.

"The TetraSpar foundation is a tetrahedral structure assembled from tubular steel components. It is expected to offer important competitive advantages with its potential for lean manufacturing, lean assembly, and installation processes, and low material costs," Bourbon said.

Another particularity of TetraSpar Demonstrator is its stability provided by a keel deployed 50m below the floater.

This is the fifth Floating Wind Turbine (FWT) project Bourbon Subsea Services has been awarded since the company decided to develop its activities towards renewable energy in 2011.

According to World Energy Reports, the global floating wind installed capacity will reach between 8 to 10 GW by the end of this decade, and next decade WER expects to see more than 60GW of floating wind farms commissioned.

Bourbon Offshore has now shared the behind-the-scenes video explaining the stakes behind the TetraSpar project and why it is an important one for the whole floating wind industry.

Horizon Europe, the EU's key funding program for research and innovation, will fund the Ship-aH2oy project aimed at developing…