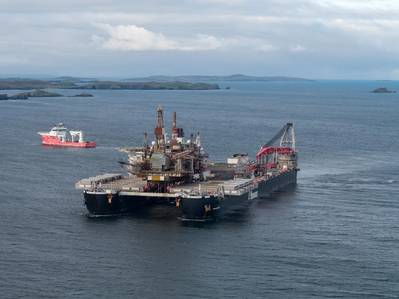 Prior to the arrival in Lerwick, the giant catamaran had removed the Ninian Northern topsides in a single-lift from a jacket standing in 140 m water depth, at the Ninian oilfield around 100 miles (88 nautical miles) north-east of Shetland.

Delivery of the Ninian Northern platform topside marked the inauguration of a new, heavy-duty decommissioning pad at Dales Voe Base where the facility has been developed by Lerwick Port Authority, expanding the capability to keep UK sector decommissioning projects in the UK.

The topside will be decommissioned at the base, with a 97% recycling target

According to Lerwick Port Authority, the transfer of the topsides by Allseas’ cargo barge, Iron Lady, to the decommissioning pad, is the first complete northern North Sea topside load-in at Lerwick.

Dismantling by contractors, Veolia/Peterson, Lerwick Port Authority said, will create and sustain jobs and investment in the local economy.

Lerwick Port Authority Chief Executive, Captain Calum Grains, said: "The arrival of the Ninian Northern topside at our Dales Voe Base is a welcome boost to activity in Shetland amidst the Covid-19 downturn and another very important stage in the development of Lerwick's reputation as an active, leading center for decommissioning.

"The pad is a significant addition to our unique quayside infrastructure, not only as a catalyst for handling larger offshore structures, but also in attracting the interest of the renewables sector for future projects, particularly floating offshore wind developments.

"The scale of the topside, the single-lift delivery, and the infrastructure already in place adds weight to the widely-accepted case for Lerwick to be the location of an Ultra-Deep-Water Quay in the UK for even bigger projects in the competitive international decommissioning and renewables industries. The proposal has strong Government and industry support."

The Port Authority’s vision for the future to allow bigger, deeper-draft vessels to berth, includes further dredging at Dales Voe to complement the planned Ultra-Deep-Water Quay.

Investment by the Port Authority has been backed by the Scottish Government, Highlands and Islands Enterprise and Bank of Scotland who have provided financial assistance for the quay development at the base, as well as the decommissioning pad.

Scotland’s Energy Minister, Paul Wheelhouse, said: “The arrival of the Ninian Northern topside in Shetland is further evidence of the strength of Scotland’s decommissioning supply chain and the capabilities, knowledge and skills held within the industry.

"I am delighted to see how recent investment at Dales Voe by the Scottish Government has been used by Lerwick Port Authority and its partners to increase the decommissioning potential of the port and help secure major decommissioning projects.

"Looking forward, the Scottish Government remains committed to establishing an Ultra-Deep Water Port at Dales Voe to unlock even more opportunities for decommissioning of top-sides and other oil and gas infrastructure by allowing the site to accommodate the largest heavy lift vessels currently in operation in the North Sea. This allows projects that currently cannot be decommissioned in Scotland, due to the lack of a deep water facility, to be retained here for dismantling in Shetland or for partnerships to allow the dismantling of some modules at other decommissioning facilities across Scotland.”

Audrey MacIver, Director of Energy and Low Carbon for Highlands and Islands Enterprise, said:  “The foresight and commitment by Lerwick Port Authority to invest in critical infrastructure continues to bring benefits to Shetland and the wider Scottish supply chain.  This latest arrival is particularly timely given current challenges being faced by the oil and gas industry and the associated supply chain.

“Building on existing strengths and expertise,  Dales Voe is firmly establishing itself as a key UK facility for serial, large scale offshore decommissioning, ensuring Shetland continues to play an ever increasing role in the country’s energy transition.“

The decommissioning pad, designed and project-managed by Arch Henderson and constructed by local company, Tulloch Developments, has an impermeable surface and a 60 tonne per square meter load which matches the quayside capacity. Unique to the quayside design is an 800 tonne per meter line loading for transfer of the topsides from the barge across the quayside.

The twin-hulled Pioneering Spirit is 382 meters long and 124 meters wide. A bow slot, 122 meters long and 59 meters wide, enables it to move around a platform and lift and transport entire topsides using eight sets of horizontal lifting beams. A 5,000-tonne special-purpose crane is used for lifts, such as lighter topsides. The vessel also undertakes jacket removal and installation.