Vigor Launches MSV(L) Prototype for the US Army 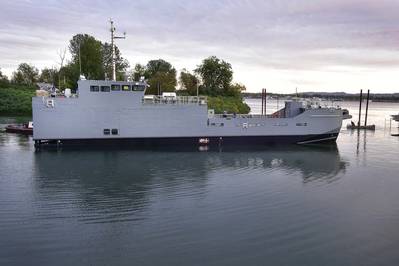 The MSV(L) will replace the Landing Craft Mechanized-8, (LCM-8,) a Vietnam-era watercraft. It is the first major Army watercraft acquisition in more than 20 years. The current Army Acquisition Objective is to build 13 vessels. (Photo: Vigor)

U.S. shipbuilder Vigor launched the first in a series of modernized landing craft for the U.S. Army at its  fabrication facility in Vancouver, Wash.

The Maneuver Support Vessel (Light), or MSV(L), will replace the Landing Craft Mechanized-8, (LCM-8,) a Vietnam-era watercraft that is unable to transport some of today's equipment due to the weight of modern combat vehicles. Designed with increased payload capability, increased speed and maneuverability, and improved draft, the MSV(L) will improve the speed and effectiveness of the Army’s dynamic force repositioning in inter-coastal areas, rivers and inland waterways, and in anti-access/area-denial environments.

“Launching the MSV(L) prototype, a brand-new, first-in-class vessel is a major achievement for us to celebrate,” said Col. Beth Behn, the Army’s chief of Transportation. “Not only does this prototype represent the first of its kind for the Army as a digital vessel, but also, the overall team has surmounted several hurdles having to do with COVID-19-related workforce and supply-chain issues. I couldn’t be more proud of this partnership to become one step closer to providing Army Mariners the world over a truly modernized capability.”

“The MSV(L) represents the first new major watercraft system acquisition in more than 20 years representing the U.S. Army’s commitment to Army Watercraft modernization,” said Brig. Gen. Samuel L. (Luke) Peterson, the Army’s program executive officer for Combat Support and Combat Support (PEO CS&CSS.) “Our Product Manager, Army Watercraft Systems, has worked very closely with our Army enterprise partners and Vigor to ensure a successful launch. The team has done an outstanding job working through some fairly significant schedule challenges in order to get to where we are today. This launch is the direct result of the collaborative work between many dedicated professionals from both the Army and Vigor.”

The Army awarded Vigor in late 2017 a 10-year contract for the development and production of up to 36 of the new watercraft. In September 2019, Vigor and the Army laid the keel in a ceremony also held in Vancouver. The current Army Acquisition Objective is to build 13 vessels, according to Wolfgang Petermann, project manager, Transportation Systems, PEO CS&CSS. The Army's strategy for the MSV(L) has centered on integrating mature commercial off-the-shelf subsystems into a new hull form, which takes advantage of the marine industry design innovation and competition, he added.

The length of MSV(L) is 117 feet. It will have a speed of 21 knots fully laden and 30 knots unladen. Its range will be 360 nautical miles when fully laden. Eight Army Mariners will crew the MSV(L).

Each vessel’s payload will be 82 short tons, which means it can haul one combat configured M1 Abrams tank, or two Stryker combat vehicles, or four Joint Light Tactical Vehicles, as well as multiple other payload configurations.

MSV(L) now enters builder’s trials, which are designed to finalize Vigor’s fabrication and commissioning activities. Builder’s trials are slated for completion in November. They will be followed by extended acceptance trials, led by the Army’s Product Manager, Army Watercraft Systems and the Army Test and Evaluation Command, to verify that the watercraft meets its intended requirements.

A low-rate initial production decision on the Maneuver Support Vessel (Light) is targeted for early 2023. The prototype is slated for delivery to the Army Mariner community headquartered at Joint Base Langley-Eustis in early 2024.