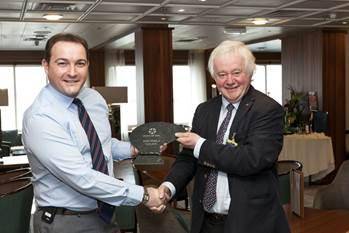 The cruise ship ‘Saga Pearl 2’ of Saga Cruises arrived in Kiel this morning (Monday, May 19th) from England for her first-ever visit to the port. She sailed over night through the Kiel Canal and was welcomed at the entrance to the Kiel Fiord with a water fountain display from a port tug which escorted the cruise ship to her berth at the Ostseekai. During a reception later on board, Kiel’s City President Hans-Werner Tovar and the Managing Director of the Port of Kiel (Seehafen Kiel), Dr Dirk Claus, officially welcomed the ship’s cruise director, representing the ship, her passengers and crew, and presented him with the port’s commemorative first-call plaque. “Kiel lies directly at the exit to the Kiel Canal and is the gateway to the Baltic”, said Dirk Claus. “So the port is perfectly  placed for a stop-over and passengers are able to get to see the places of interest in north Germany during a day ashore.”

Kiel’s land excursion program for cruise ship passengers ranges from city tours through scenic trips across the holiday region of Schleswig-Holstein to visits to the Hansa city of Lübeck and northern Germanys biggest city Hamburg. All these destinations can be reached quickly and comfortably from Kiel in modern coaches accompanied by competent multi-lingual guides. “A visit to north Germany is well worth while”, said Dirk Claus. “The tourist infrastructure has been extensively developed and the destinations are more than mere sight-seeing experiences”, he added. In recent years, the number of foreign passengers who have taken part in daily excursions from cruise ships berthed in Kiel has increased steadily. In 2013 the figure was 60,000 – mainly English-speaking cruise ship passengers. As well as Saga Cruises, ships of the shipping companies Fred. Olsen, P&O and Holland-Amerika Line are this year also due to visit the port of Kiel from England.