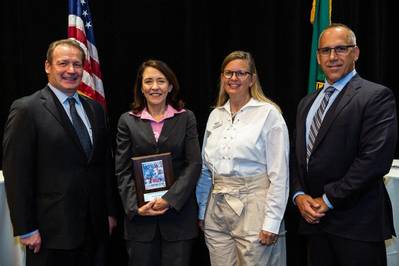 According to the findings of a new report conducted by PricewaterhouseCoopers (PwC) on behalf of Transportation Institute (TI), the domestic maritime industry in Washington ranks sixth among all American states for jobs and labor income relating to the Jones Act.

The industry employs more than 22,500 individuals, produces $6.12 billion for the local economy, and generates more than $1.5 billion in worker income.

Washington Senator Maria Cantwell joined business and government leaders from around the region at the Seattle Maritime Festival Breakfast, presented by the Seattle Propeller Club with the Port of Seattle, to celebrate the importance of the domestic maritime industry, sustaining 22,500 local jobs, and announce the 34 percent growth of domestic maritime jobs created in the State of Washington.

At the Seattle Maritime Festival Breakfast, Sen. Cantwell was presented with the “2019 Seattle Propeller Club Public Official of the Year” award in recognition for her long-standing support of the domestic maritime industry, port infrastructure, maritime commerce, and the Jones Act.

The Jones Act is not only a vital anchor for America’s national security strategy but also a pillar of economic strength and job creation for the Pacific Northwest. Specifically, this law states that the transportation of merchandise between U.S. points is reserved for U.S. – built, owned, and documented vessels.

“The Jones Act is a juggernaut when it comes to helping us, and we are not talking about a relic, but a key tool in growing our economy for the future,” said Washington Senator Maria Cantwell while speaking at the Seattle Maritime Festival Breakfast, presented by the Seattle Propeller Club with the Port of Seattle. “As shown in this report, the Jones Act has created 22,000 jobs here in Washington State, a 34% increase since the last report in 2014.”

“The Pacific Northwest is a leader in the domestic maritime industry, supporting nearly 22,500 family-wage jobs and contributing over $6.12 billion to the local economy,” said James L. Henry, Chairman and President of Transportation Institute.

“The findings in our most recent study demonstrate the strength and necessity of the Jones Act which serves as the backbone of the American maritime industry, the U.S. industrial base, and job creation for the hardworking men and women that crew the vessels delivering both in times of war and peace,” James added.

“In addition to the job creation benefits detailed in this study, our American mariners are relied on by defense leaders to project American force overseas in a national emergency.  Alongside our waterfront workers, they are the eyes and ears of homeland security on our nation’s coasts and waterways. Our American controlled fleet provides economic security, ensuring that our nation’s internal freight transportation system is not subject to foreign interference. American maritime jobs always have and will continue to be vital in the never-ending task of keeping America safe, strong and prosperous for generations to come,”  Matt added.

“TOTE is honored to call Washington home and we are proud of the many contributions that our employees, vendors, contractors, partners and peers have made over the last 40 years to help drive one of the most significant economic engines in the Pacific Northwest, the domestic maritime industry,” said Grace Greene, President of TOTE Maritime Alaska, which provides safe, reliable and efficient service between Tacoma and Anchorage.

“TOTE’s success, and that of our industry, is rooted in our commitment to safety, innovation and focused investments that create a significantly positive impact for those we serve and the areas in which we operate,” Grace added.