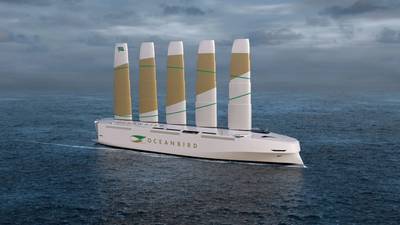 A Swedish consortium aims to launch commercially by 2025 a wind-driven car carrier that will emit 90% less carbon dioxide than a conventional roll-on/roll-off (RoRo) cargo ship, it said on Thursday.

The 25-meter-long carrier will have a capacity for 7,000 cars and have a maximum height of 105 meters when its four 80-meter upright "wing sails" are fully extended - bringing to mind a futuristic version of the wings of a 19th century clipper.

"This will of course challenge our habits and when this vessel will be in the ocean sailing, it will be an odd bird," consortium partner Wallenius Marine Chief Operating Officer Per Tunell told an online news conference. "We are on track to make it possible for launching and putting this vessel in operation for late 2024."

The consortium said in a statement a North Atlantic crossing would take the ship around 12 days, against eight days for conventional vessels.

"The technology of the wing sails is quite similar to airplane wings," Wallenius Marine architect Carl-Johan Soder said, adding that the 90% emission reduction estimate was based on a North-Atlantic crossing at an average speed of 10 knots.

The vessel will have a fuel powered engine for operating in ports and for support when wind is very weak.

Tunell said the vessel would be slightly more expensive than a traditional RoRo carrier of comparable size.

Besides Wallenius Marine - which is controlled by the founding family of the Wallenius RoRo shipping group - the consortium includes Sweden's Royal Institute of Technology and shipping consultancy SSPA. The project is co-financed by the Swedish Transport Administration.