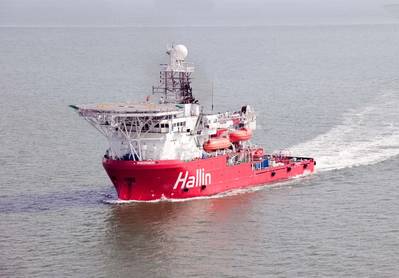 Operating on behalf of a major Indonesian oil company, the Windermere is engaged in a wide range of testing and platform support operations. These include repair and maintenance of subsea gussets, underwater welding of gusset plates and grouting work on mobile offshore production unit (MOPU) legs. A central element of the project is the Windermere's integral 15-man saturating diving facility.

"Gas from the Maleo field is being produced from a MOPU supported by a six-wellhead platform," explains John Giddens, Hallin Marine's Chief Executive Officer. This is connected to a 7.4 kilometre spur-line to the East Java Gas Pipeline for distribution to the Surabaya and Gresik gas grid. The region is notorious for strong wind and choppy seas. These create a challenging environment in which to perform saturation dive work.

"Hallin was selected for the contract because we are able to provide the precise solution the client is looking for. Windermere enjoys a high reputation in Indonesia, having carried out many projects in the region with great success. This latest project is expected to complete in mid November.

The Maleo gas field was discovered in June 2002 and is estimated to have proven and probable reserves of around 240 billion cubic feet. Production commenced in 2006 using a multiple-wellhead platform connected via a 7.4 kilometre spur to the East Java Gas Pipeline for distribution to the Gresik and Surabaya grid.