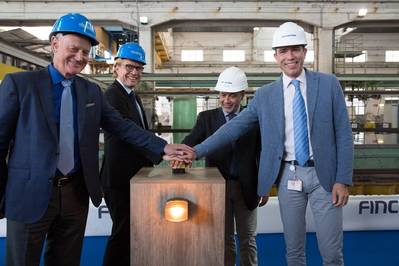 esterday at Fincantieri’s shipyard, in Palermo, Italy, Christopher Prelog, Vice President of Fleet Operations for Seattle-based Windstar Cruises, activated the torch to make the first cut in the new steel that will become the newly constructed mid-section of the company’s new ship MS Star Legend. This is the second of three new mid-ship sections being designed and constructed as part of Windstar’s $250 million Star Plus Initiative which aimsto expand and transform the line’s three Star-class vessels.

“This is a momentous day for Windstar as we reach another major milestone,” said Prelog. Andrew Toso, Vice President Ship Repair and Conversion of the Fincantieri Services Division, added: “As the reference point worldwide for this kind of highly complex operations we are very proud to partner with Windstar for such an ambitious program, and the milestone we are celebrating today is the best proof possible of our commitment and successful project management we are bringing in.”

Star Legend is the second of three Star-class vessels that will undergo the transformation from a 212-passendger ship to 312 passengers by installing a new section in the ship. The transformation of the three ships will increase capacity by 100 with the addition of 50 new suites, the majority of which are to be housed in the new mid-sections being built at the Fincantieri shipyards in Palermo.

In addition, the transformed ships will have two new restaurants including the Spanish-styled Cuadro 44 by Anthony Sasso and an alfresco Star Grill by Steven Raichlen capitalizing on the ship’s increase in deck space. Other additions include a new pool and whirlpool, a spa and fitness center, and new retail shops.

Windstar’s award-winning small ships will be cut in half to allow the installation of a new stepped mid-body section that will lengthen each vessel by approximately 26 meters (85 feet). The total capacity of the “new” expanded ships will be 312 guests, and additional staff will be hired in order to maintain the line’s impressive 1.5 to 1 guest-to-service staff ratio.

The new mid-ship sections for Star Legend and Star Pride  will be fabricated over about a six-month period of time and are due for completion in 2020. The first Windstar ship to emerge from this transformation, Star Breeze, will sail from Barcelona to Lisbon on February 20, 2020, and celebrate re-inaugural activities in North America at the Port of Miami on March 19, 2020. Star Legend will complete the transformation in late June and debut in Barcelona on July 2, 2020. The third and final ship will be complete with the departure of Star Pride from the shipyard in the fall of 2020, with the first cruise sailing from Barcelona on November 20, 2020.