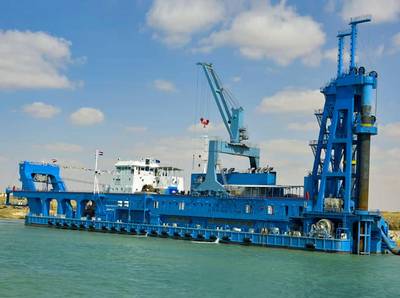 Egypt is working to improve the Suez Canal by making an additional 10 kilometers accessible to two-way traffic, while widening and deepening another 30 kilometers, the chairman of the authority managing the waterway said on Tuesday.

Suez Canal Authority Chairman Osama Rabie, giving the first news conference on the expansion which began in June, said it would be too expensive to widen the entire length of the waterway linking the Red Sea and the Mediterranean.

However, the two-way portion would be lengthened to 85 kilometers (53 miles) from 75 kilometers, he said.

Global shipping traffic was disrupted last year when one of the world's largest container ships got stuck in the southern section of the 190 kilometer canal for about a week.

Rabie was speaking on a dredger north of Suez, about two kilometers from where the container ship, the Ever Given, got stuck last March. The expansion, which was scheduled to start in January, was accelerated after the crisis, he said.

The work aims mainly to increase traffic safety. Once finished, the transit time to pass through the canal will remain at about 11 hours, Rabie said.

The project's second phase consists of widening the 30-kilometre portion extending south to the mouth of the canal by excavating 40 meters out of its eastern side. This portion, where the Ever Given was grounded, will also be deepened by six feet.

"This is a difficult portion of the canal," he said, adding that "the deepening and widening will smooth out the bends in the canal at that point," and reduce the impact of southerly winds.

The project will cost 3 billion Egyptian pounds ($191 million) and will be completed and inaugurated by the end of June 2023, he said.

Rabie told CNBC Arabia separately on Tuesday that the authority is considering listing shares of some of the companies it owns on Egypt's stock exchange, and that it expects to sell 20% stakes in two or three, namely Canal Rope, and Canal Harbor and Great Projects.