Will 2020 be the year for Subsea Mining?

Anyone who has been around the Offshore Oil and Gas or the Marine industries for long has heard of plans for mining various minerals located on or just below the seafloor. In fact, when Howard Hughes built the Glomar Explorer in 1972, the cover story for its true mission – recovering a Soviet submarine - was that the rig would be used to mine manganese nodules from the deep ocean floor.  This cover story was so effective that it had the unintended consequence of stirring great interest in ocean mining among offshore companies and the general public.

In the years since, there has been a great deal of research and exploration in this field.  However, except for shallow water diamond mining off the coast of Southern Africa, no commercial deep-sea mining operation has yet been started. Now it seems that 2020 may actually be the year that commercial deep-sea ocean mining starts in earnest.

Types of ocean minerals.
There are three types of deep-sea ocean minerals of commercial interest; polymetallic nodules, seafloor massive sulfides and polymetallic crusts.
Polymetallic Nodules were the first of the seafloor minerals to be discovered.  These nodules are of commercial interest for their high manganese content. In one area of the North Pacific Ocean seabed known as the Clarion Clipper Zone, the International Seabed Authority (ISA) estimates there are over 20 billion tons of these nodules. Generally, these nodules lie atop ocean sediment at depths greater than 3000 meters.

Seafloor Massive Sulfides (SMS) are formed by undersea volcanos and generally lie in shallower water than manganese nodules.  The deposits of copper, zinc, gold and silver are what is of commercial interest in these areas. Many, if not most of these potential fields are located in the Pacific Ring of Fire and are found within a Coastal States’ Exclusive Economic Zone (EEZ)or outer Continental Shelf.

Finally, Polymetallic crusts are also found in relatively shallow water within coastal states’ EEZs.  These crusts form a hard pavement on the seabed up to 25cm thick. The minerals of commercial interest are cobalt, titanium, platinum and some rare-earth minerals (REM).
Each of these types of deposits present their own unique challenges for effective and environmentally sound mining.  As a rule, equipment designed for one type of mining is only suitable for that type. 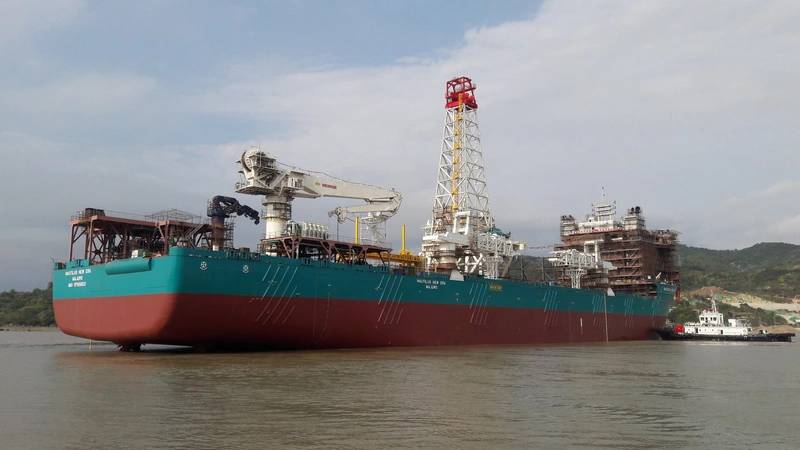 Solwara1 Mining Support Vessel , location- FUJIAN province PRC.   Courtesy FUJIAN MAWEI SHIPBULDINGChallenges
Legal
Although the technical challenges are daunting for any type of deep-sea mining, the legal and environmental challenges presented to any mining operation are potentially even more so. Any commercial subsea activity which falls within the EEZ generally 200nmi (and for the purposes of subsea mineral rights, extends out to 350nmi to the continental shelf) is governed by an individual coastal state’s regulations.
Some of the Pacific Island nations which early on had significant offshore mineral discoveries have enacted their own legislation to govern mining.  For the many areas of commercial interest which fall outside these coastal state boundaries; the United Nations Convention on the Law of the Sea, which established the International Seabed Authority (ISA) came into force in 1994. The ISA has since then met with stakeholders to further its main goals of regulating deep-sea mining and protecting the ocean environment from any harmful effects of mining operations. In the ensuing years, the ISA has promulgated prospecting and exploration regulations for all types of seabed minerals.  Starting in 2016, the ISA began drafting Regulations on the Exploitation of Mineral Resources, which must be in place before any commercial mining operations can commence.  There is a good chance now that the Regulations could be promulgated in 2020.  A link to the draft version of the Regulations can be found here https://ran-s3.s3.amazonaws.com/isa.org.jm/s3fs-public/files/documents/isba24_ltcwp1rev1-en_0.pdf

Technical
When transitioning from the prospecting phase to the commercial exploitation phase, there are four main challenges to be faced:
1. Designing and building a suitable mining support vessel or installation.
2. Designing and building proper subsea mining tools – that is, the machines actually perform the mineral extraction on the seafloor.
3. Designing and building the riser and lift system for transporting the mineral slurry to the surface.
4. Once on the surface, dewatering and cargo handling.
However, the most daunting technical challenge of all is incorporating all these new technologies into an integrated system that will work reliably, effectively, and seamlessly for the entire mining field life.
It must be remembered always with the design of each of these systems that, in addition to being capable of meeting the technical design specifications, they also must meet the environmental rules established with respect to biodiversity, plume density and extent, and sedimentation rates, rules either of the ISA in International Areas, or of the Coastal State within the EEZs.

Mining Support Vessel
The first necessity in any subsea mining plan is a suitable floating installation.  In addition to the most basic maritime design consideration of stability, structural integrity, station keeping, and safety, special design considerations for support of subsea mining must be taken into account.  These include handing of seafloor mining tools, handling of riser and lift systems, cargo dewatering and handling systems. As with oil and gas installations, abandonment and recovery operations due to weather or other circumstances must be properly planned and designed into the vessel or rig.

For many, the Solwara 1 Production Support Vessel which was built and launched at Fujian Mawei Shipyard is an example that includes all of the key elements.

Seafloor Mining Tools
Except for the nodular type of minerals that can be directly collected and lifted to the production vessel, many different varieties of seafloor mining tools will be required to prepare the seafloor mined material to the sizes that can be effectively lifted to the production vessels. For SMS mines, the mining tool prototypes have been built and to some degree successfully demonstrated. Other seafloor mining tool prototypes have been tested successfully.  Most designs involve a crawler of some type with either a cutter or a suction head depending on the target materials.

Risers and lift systems.
The difficulty of moving many tons per day of dense slurry from depths of 1000 meters or more cannot be underestimated.  For SMS projects where the depths may not exceed 2000 meters, steel risers of the vertical top tension design are mainly contemplated.  For mining nodules in depths greater than 3000 meters, the weight of steel risers is a huge problem, so alternative materials are being considered.  Pumping systems involving centrifugal pumps are also quite problematic for these lifting distances.  A positive displacement design subsea pump was built by GE Subsea Systems for the Solwara 1 project. An air lift system test loop and small-scale air lift systems have been constructed and tested so far but have not been scaled to deep-water for testing.  Others have proposed truly innovative designs which do not involve pumps or air lifts, such as a continuous conveyor system or even magnetic induction systems.

Although not as eye-catching as the seafloor mining tools or subsea pump design, it must be considered that once the slurry reaches the mining support vessel or rig at the surface, the water must be removed and returned to the approximately the same depth from where it was extracted. Meanwhile the  remaining ores must be dried and stored until they can be sent ashore. Much thought has gone into how to design environmentally sustainable dewatering and cargo handling systems, with most designs contemplating some combination of settling, cyclone separation, and heat drying.  Produced water, because of microbial content and temperature differential cannot be discharged at the surface. Therefore, a system of pumps and downcomers to the near seabed must also be designed. In order to be successful, the  amount of production from a single Mining Support floater would entail producing at least 1000-6000 tons of dried ore per day; so the economics would seem to dictate the need for a ship to ship transfer to a shuttle type of cargo handling vessel while the mining vessel remains on station.  In this area, the dredging industry may offer a guide to similar technical solutions.

It is important to identify what role each stakeholder plays in full-scale subsea mining.

First and foremost is the Owner, or in the ISA terminology the Contractor. This is the organization which is most directly responsible for implementation of the design and operation of any undertaking. In many cases, national organizations are contemplated for this role, as commercial entities are considered too risk averse, or underfunded.  In the case of China, there are State Owned Enterprises (SOE) which are well funded, and deeply involved in several different mining projects. Worldwide, there are many other state and commercial actors who are at various stages of readiness in their mining plans.

Regulators – The regulators are the International Seabed Authority in International Areas, the Coastal State authorities in the EEZs and also the Flag State authority of the Mining support vessel.  All of these will enforce specific safety and environmental protection regulations.
International Classification Societies – Much like the established conventions for Safety of Life at Sea (SOLAS) and Prevention of Pollution from Ships(MARPOL), International Classification Societies are recognized by the signatory states of these conventions and by Coastal State authorities as competent to monitor compliance with the conventions.  These societies have established themselves as well positioned to verify compliance as third parties between the Owners and the Regulators.  Additionally, proper design, construction, installation, and survey after construction of subsea mining systems are vital to ensure the health and safety of operators as well as protection of the marine environment.  To this end, ABS has Rules and Guides which aid not only Owners and Regulators, but also financial institutions and insurance underwriters with evaluating whether standards are met and maintained in accordance with ABS Rules and other conventions during the operational life cycle of the project.

The General Public
Since the Oceans are designated as the common heritage of mankind, it must be considered that the entire population of the earth is a stakeholder in any subsea mining operation.   Therefore, it is the duty of all other stakeholders, the Owner, the Regulators, and the Class Societies to ensure that subsea mining is conducted in a way that meets safety standards and in an environmentally sustainable manner.

The goal of sustainable mining of the mineral resources from the deep ocean floor has always seemed just out of reach.  Now, for a confluence of reasons, establishment of a proper regulatory environment, advances in materials and engineering, and an increasing worldwide demand for metals, it is more than likely that 2020 will be remembered as the year that the world’s first full scale subsea mining venture begins. It is now up to the stakeholders in this new industry to coordinate and implement well thought-out and well executed plans that are not only economically viable, but also meet or exceed environmental protection regulations. As the leading offshore Classification Society, ABS stands ready to play an important role, ensuring safety and environmental protections are in the forefront.  If executed responsibly by all stakeholders, there is no reason why this new industry will not have a bright future.