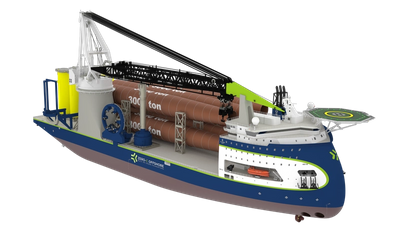 The number of planned offshore wind projects globally is growing, spurred by green targets and a shift away from Russian oil and gas. This growth, alongside a shift toward the next generation of larger offshore wind turbines, is contributing to a shortage of foundation installation vessels that is “going from severe to chronic,” said Jon Oliver Bryce, CEO of Zero-C Offshore Ltd. "There's a niche and misunderstood sector within this vessel space for the renewable industries. And it appears to me that everybody's missed this. It appears to me that there's going to be an enormous shortage of these vessels because nobody has figured this out yet."

The pipeline of offshore wind projects to be commissioned in the coming years is growing, and the urgency for these projects has intensified as many countries—especially those in Europe—seek to add new energy sources that are both green and non-Russian. Add to this big offshore wind plans in several Asian countries and the United States, and you’ll find a very large pipeline of projects with only a handful of vessels currently capable of installing their foundations.

“If you look at what the UK has promised the world, it needs 50 gigawatts (GW) of offshore wind power by 2030. That means we need four FIVs working full-time from now until 2030 to install all those projects. And that's just what the government wants. The commercial market will want more than that,” Bryce said. “And it's a similar target in Holland, it's a similar target in Denmark, it's a similar target in France, Norway, Poland, most of the Baltic states, and Spain. Then you move around to Southeast Asia and into the States. There are not enough vessels. It's as simple as that.”

According to Bryce, the global fleet of vessels capable of installing the foundations for today’s 10- and 12-megawatt (MW) turbines consists of eight vessels, only four of which were purpose-built. But that’s not the “real issue,” he said. “We've got a very limited supply now, but going forward, a lot of that supply won't be fit for the purpose.”

While a greater number of projects will require even more vessels to install their foundations, the bigger problem is that the vessels presently available won’t be able to handle the larger foundations of the future as turbines continue to scale up. In a relatively short period of time, the industry has advanced from 2 MW turbines to the 10-12 MW turbines being installed today. “But we're heading for 15, and we know we're going to get to 20 MW,” Bryce said. “When we started, the foundations were 500 tons and they went to 1,000 tons. And now, a really big foundation, a big tube on a monopile, which supports the latest generation of offshore wind turbines, can be 3,000 tons. We are heading for 4,000 or 5,000 tons.”

“Here comes your perfect storm. We're about to have an exponential increase in offshore wind park activity. At the same time, individual turbines have increased in size because of design and economics, and there are no vessels,” Bryce said.

Zero-C is working to bring to market of a vessel of its own to help tackle this challenge. It has been working with Ulstein Design & Solutions B.V. in the Netherlands to design a vessel that Bryce calls “future-proof,” capable of installing the fixed foundations for tomorrow’s 20 MW turbines. The ship-shaped dynamically positioned vessel will be about 230 meters long by about 60 meters wide, with accommodations for 160 people on board, and equipped with a 6,000-ton Huisman crane.

Among other key characteristics, the vessel will be UK-flagged, it will be “mission flexible” with a number of layout options, it will be rated for high sea states (HS 3), and it will run on a cleaner burning fuel, likely dual fuel diesel with low-carbon green methanol to start.

“[This] is very important to us,” Bryce said. “The world's going green, but also, IMO 2050 means that 50% of the world's vessels must be zero emissions by 2050. And we've got all kinds of other legislation coming in, European directives and some British Maritime Act, et cetera, saying we want zero emissions.”

Bryce said Zero-C chose methanol after weighing a range of options and determining ammonia—the company’s first fuel choice—carried too much risk as too new an option, and that engine advancements would not meet timeline targets. “We came to the conclusion that the engines probably wouldn't be ready [in time]. And also, when we were taking the company to market saying that's a brand new company, brand new management team, brand new concept, has a brand new fuel, we're probably spinning too many plates for investors,” Bryce said. “We decided to park the ammonia, reluctantly. We can still design our vessels to call them ammonia-ready, which means in the future there's sufficient space and pipe work.” 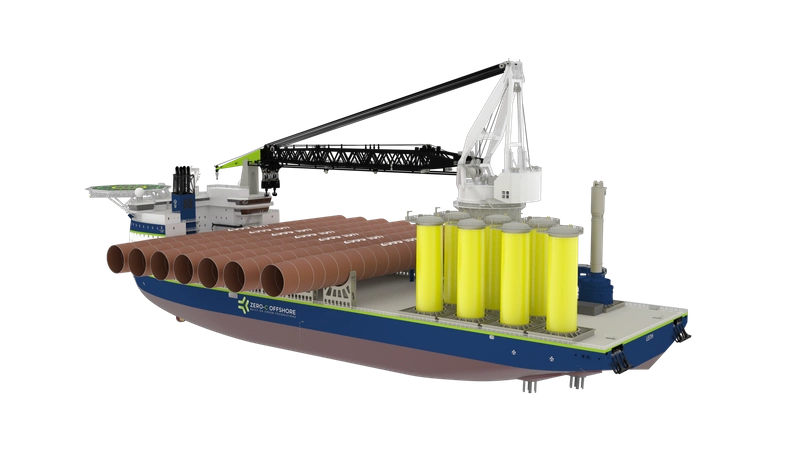 The result is a vessel that Bryce said is “literally the best pick, first choice in the entire world fleet of purpose-built [FIVs]. . . This vessel will be utilized 365 days a year, every year that it's in play. And the day rate squeeze is about to come, and it's going to be considerable because there's no supply.”

Zero-C created the pre-concept design in-house before going to Ulstein for help with the concept design. Working with Clarksons Platou, Zero-C took the design to shipyards in China, Singapore, South Korea, and the UK for price quotations. “We got some very, very competitive pricing from Asia. What comes next is we secure funding for the vessels, and then we engage with Ulstein again for the basic design,” Bryce said.

Zero-C has a memorandum of understanding (MOU) with Ocean Services—a Norwegian company formally called North Sea Rigs, with a lot of experience managing complex build projects in Asia—for construction project management. “It's all about seamlessly delivering a complicated project and bringing in the best people and also a clever way of paying for this. It’s about mitigating the risk and ensuring seamless delivery.”

Bryce said Zero-C’s potential customers fall into two categories: offshore wind developers and transport and installation (T&I) contractors. “We've had a lot of conversations with many of each. And we've gotten to the point when we have been talking about moving forward with commitments in writing,” Bryce said. “They want to see us build, but we want to see them commit to us, help us to allow us to build. The issue at the moment is the equity market is just literally being wiped out since Q2.”

Bryce said Zero-C Offshore doesn’t currently qualify for financial support from the Scottish government, but it has received assistance in other ways. “The Scottish government has said, ‘Look, we will support you. We'll partner you with customer meetings. We'll come to the investor meetings. We will introduce you to our network. We will do everything we can, other than give you funding, until we can give you funding when you qualify.’”

The company has also been liaising with the British government for possible financial assistance. “They're much bigger than the Scottish government. And they've got bigger pockets, and they can do things in different ways,” Bryce said. The company is in talks with the UK Infrastructure Bank, which Bryce described as a new bank set up by the UK government to fund projects that are green, create jobs, and can't be conventionally funded due to some unusual circumstance. “There's no promises from them at the moment. We've certainly opened a line of communication and we'll see how it goes.”

Zero-C has also been exploring other financial avenues, but Bryce said these have mostly closed off due to uncertainties created by the Ukraine conflict. “It's beyond frustrating that we can't get the capital markets to engage in this at the moment,” he said. “We're guided by some big banks at the moment. We speak to three on an ongoing basis. Very, very supportive. But the reality is that IPO markets are pretty much closed at the moment. It doesn't matter what story you've got.”

Bryce and Zero-C Offshore are pushing forward, keeping in sight the offshore wind industry’s desperate need for FIVs. “I spoke to the chief financial officer of a very well-known Scandinavian investment bank at the start of this year, and I described [the FIV shortage]. He said he'd never seen such a chronic supply of bottleneck and looming in one industry,” Bryce said. “When we're having our tricky moments trying to get this funded or trying conversations, I remember what he said. I was right, and he was right. And there will be a point when this whole sector bursts into life. You heard it here first.” 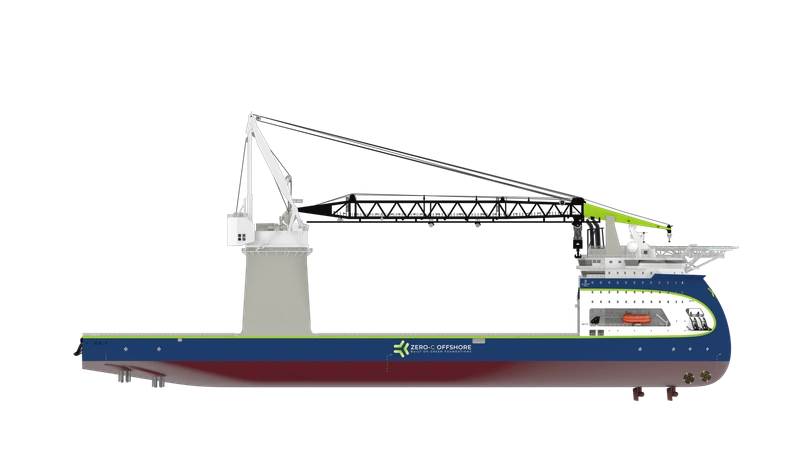 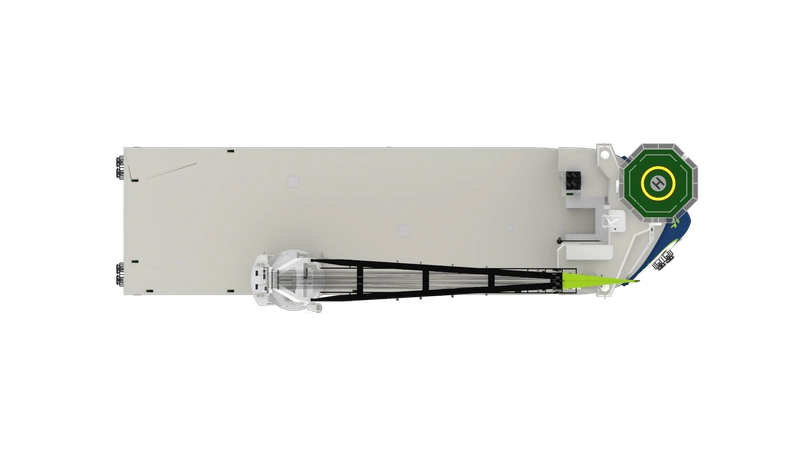 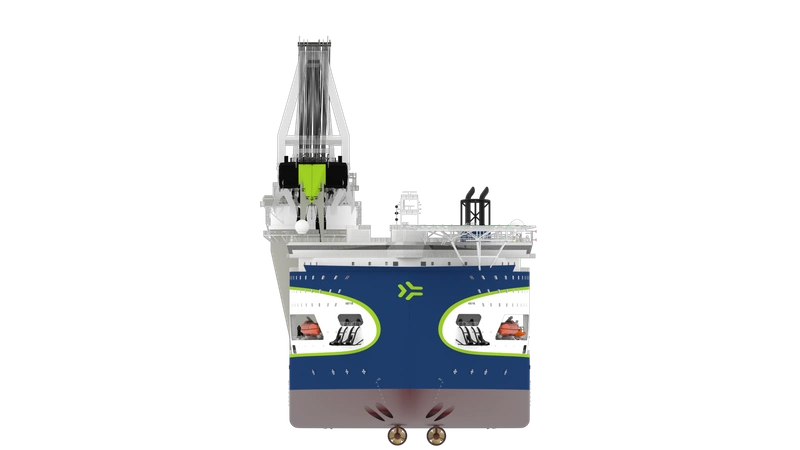