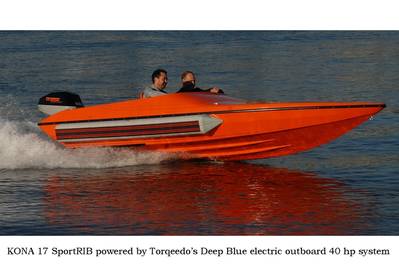 Team Scarab, in conjunction with Torqeedo Motors and Ruckmarine, is pleased to announce the launch of the KONA 17' SportRIB, the first zero-emission, all-electric sport boat. The Kona debuts at the Progressive Insurance San Francisco Boat Show, January 23-26 at Pier 48 in San Francisco, California. The sport boat, powered by Torqeedo's multi-award winning Deep Blue electric outboard 40 hp system, has been integrated with the Kona 17, a modern throwback to the fun, simple family sports boat of the '60s and '70s.

"There is a great resurgence of the classic sport boat within the marketplace. Powering this with Torqeedo's propulsion system is a great alignment in both form and function for the modern boater's needs," said Larry Smith, designer, president of Team Scarab, and a name synonymous with performance boating in the U.S. over the last 40 years.

The Deep Blue electric outboard system delivers 40 hp with one of Torqeedo's 13 kW high-powered lithium ion batteries, (also available in twin battery configuration for longer ranges). The result is a sporty feel and performance that has never been experienced with electric boats.

The KONA 17 achieves a top speed of up to 27 mph, and cruises on-plane at 15 mph. For typical recreational usage, the KONA 17 can deliver one-two hours of active runtime. At no-wake speeds, the runtime is in excess of 3.5 hours. Its lithium-ion battery pack can be topped off over lunch with the on-board charger and standard 110-220 volt AC, 30 amp shore power, for extended time on the water or a quick run home. The battery can be fully recharged in just over four hours from 0% either at the dock or at home. Additionally, Torqeedo provides a nine-year, 80% capacity battery guarantee, providing years of carefree, economical boating.

The KONA 17 is available in two- and four-seat models. The sport boat is a high-performance runabout with two bucket seats, ideal as a couple's cruiser. The SportRIB is a 2+2 configuration with a rear bench seat, and incorporates the patent-pending SCARIB Stability System (S3), inflatable collars that increase buoyancy to allow seating for four, providing a great platform for family watersport activities. The SCARIB Stability System also provides convenient built-in fendering.

Ruckmarine will market the system to green boaters and technology enthusiasts on the West Coast starting with the launch of the product at the inaugural San Francisco Boat Show. "We have a full schedule planned for the new year, spring and into the summer. We will be displaying the boat at various shows on the West Coast and we are actively working on demo days into the spring," said Scott Ruck, owner of Ruckmarine.