2020 Has Been a Big Year for US Offshore Wind

Philip Lewis is Director of Research at World Energy Reports and author of... 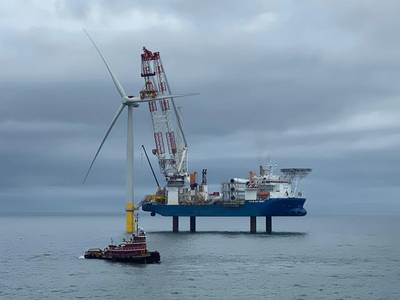 This has certainly been an active year for offshore wind, both in the U.S. and globally. Looking at the U.S. in particular, the East Coast is certainly giving cause for real optimism with a clear pipeline of state procurement targets indicating 12 gigawatts installed by 2030 and 29.1 gigawatts total installed by 2035. That means around $55 to $87 billion of capex, which will support the growth of the significant domestic supply chain.

Virginia saw the first installation of offshore wind turbines in federal waters this year with CVOW (Coastal Virginia Offshore Wind) 12 megawatt pilot project. The pilot has completed reliability testing recently and is ready to enter commercial service. The next step is to get BOEM a technical review of final documents, but turbines remain operational during the period. This is a really important step on Virginia's part to meet its 5.2 gigawatts of installed offshore wind target by 2034. Dominion, the developer, has formed a very interesting relationship with the world's leading offshore wind player, Ørsted, that helped it deliver the pilot project and will help it deliver the major developments in coming years.

The governors of Virginia, Maryland and North Carolina recently announced tri-state collaboration to advance wind projects and the offshore wind supply chain in the Southeast and mid-Atlantic. This could benefit projects like the 800 megawatt Kitty Hawk project off North Carolina and Virginia.

Rhode Island is home to America's first wind farm, the 30 megawatt Block Island development in state, not federal, waters. The state is a procurer of 400 megawatts of power from Ørsted's planned Revolution Wind Project. The governor has announced a request for proposal for first half of 2021 for 600 megawatt wind farm as part of the state's plan to source 100% of its power from renewable sources by 2030.

New York is the state with the largest target for offshore wind installed capacity in the U.S. at nine gigawatts by 2035. Around 20% of the procurement target has been made to date by NYSERDA and LIPA for the Empire Wind Sunrise and South Fork Projects. But a number of developers have just submitted bids for NYSERDA's recent wind solicitation for up to 2,500 megawatts of offshore wind, with targeted awards in the fourth quarter. These submissions include Equinor with two bids, and probably by the end of the first quarter of next year, we should see BP as a 50% partner in the project, marking a big move by the oil and gas company.

The projects on the Equinor bid are Empire Wind Phase Two, which is around 800 megawatts, and Beacon Wind for 1,230 megawatts. These will both use the South Brooklyn Marine Terminal for construction and the O&M base. Ørsted and Eversource submitted multiple options for the Sunrise Two offshore wind farm, and they have Con Edison as a partner for the distribution—a very important part of the success of the wind farm. Iberdrola has submitted through its U.S. subsidiary, AVANGRID with the Vineyard joint venture with CIP, with the up to 1,300 megawatt Liberty Wind Project.

And finally, all eyes remain on the BOEM environmental and technical review and approval process for the Vineyard 800 megawatt wind farm off Massachusetts. This is very important in the context of future Atlantic offshore wind technical resource potential development and state capacity targets. Vineyard is the litmus test. The review also covers a range of developments, including up to 14 megawatt turbines and the building of 50% monopiles and 50% jackets, the latter, which could undoubtedly raised U.S. supply chain opportunities. A decision is expected to be made in late December by BOEM, and could be the trigger to accelerate the approval of a further 10 wind farms for 7.4 gigawatts that are already at the similar stage to Vineyard (the COP stage).

At a macro level, there are several key trends driving the supply and demand balance for WTIVs. These are the ever increasing size of wind turbines and offshore wind farms being built further offshore in deeper waters. Obviously, the initial wind farms are built closer to shore, and as time goes on, they will be built further offshore. The average age of today's wind turbine installation vessels is around 13 years. It doesn't sound too old, but if we look back to 2010, the largest turbines were around 3 megawatts. They had a rotor diameter of 90 meters. By 2016, we'd already reached 8 megawatt turbines with significantly larger rotor diameters of 165 meters. The latest generation of turbines have rotor diameters in excess of 220 meters. Larger turbines need larger monopiles or jackets on which to sit the turbines and larger installation capabilities. Deeper water means longer legs to be jacked up. Some of the fleet has been modified and upgraded, but new tonnage is being committed all of the time to keep up with both the latest technical demands and the increasing demand of role for installation capacity as offshore wind keeps on growing.

Several international markets want to maximize the amount of local content, and as a result, newbuilds have been specifically targeted for the Taiwanese and developing Japanese markets. We're also now seeing talk of U.S. Jones Act compliance with turbine installation vessels with Dominion leading a consortium to locally bid the vessel with a 2,200 ton crane capable of lifting today's largest planned turbines. That's the 220 meter rotor diameter, Siemens Gamesa, 14 megawatt direct drive turbine, for their 5.2 gigawatt pipeline of projects in Virginia.

Floating wind farms
We see floating offshore when rapidly moving from the current status of demonstrators and pre-commercial projects to full scale commercial wind farms in the North Sea, the Mediterranean, the Atlantic and East Asia. There is a substantial developing pipeline of projects in these markets. In fact, we are monitoring over 60 gigawatts of floating projects at various stages of the development pipeline, and this just keeps growing. As projects become larger the technology is becoming increasingly cost-competitive and is offering the supply chain some significant opportunities.

The question of how to industrialize the supply chain to deal with multiple concurrent 500 megawatt wind farms is worrying many developers and contractors. But as with every challenge, we see opportunities for fabricators, concrete contractors, shipyards and offshore yards, supports, mooring chain providers, synthetic rope manufacturers, anchor suppliers and of course, OSV owners and operators.

In addition to providing power to electricity grid, we see floating offshore wind, along with bottom fixed offshore wind farms, providing power for the decarbonization of existing oil and gas operations—very suitable for the Gulf of Mexico. As it's being planned currently at Equinor's floating Hywind Tampen project, and also for powering electrolyzers to turn water into oxygen and more importantly, hydrogen, a key element of the ongoing global energy transition. This is something that we are monitoring with keen interest at World Energy Reports.