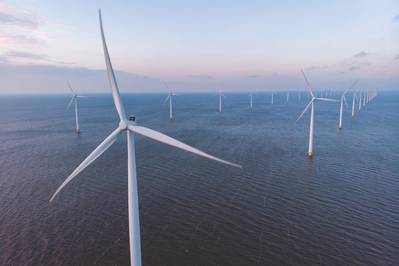 Offshore wind caught a favorable gust with the 2020 election of Joe Biden, and the following breeze from the early 2021 reconfiguration of the U.S. Senate toward Democrats. Though widely touted as a growth engine for maritime businesses (as well as shoreside trades), the latter years of the Trump administration seemed to see delay after delay.

The class society DNV has been involved in offshore wind since its outset in the early 1990s, and now has 2,000 energy experts working in its efforts supporting this power source. Its business development manager, Nick Prokopuk, described the North American situation as being one of “revolution, not evolution” in a presentation at the recent Greek/Norwegian Chambers of Commerce virtual Shipping Conference, saying that “the growth forecast is exponential.” He explained that the coming decade will give rise to a huge demand for vessel construction for installation, service/maintenance, crew transport and guard duties. Speaking about the possible future of installed capacity, he said “the U.S. is looking to surpass what Europe accomplished over 30 years in the next nine to 10 years.”

The business is complicated; individual states—many with major decarbonization initiatives—deal with power purchases, but going forward the actual electricity will be generated from lease sites in federal waters (more than three miles offshore), and therefore subject to processes commanded from Washington, D.C. On the shore, building new supply infrastructures requires planning; yet, historically, inter-port coordination, if any, has varied state by state. Thus, new paradigms are emerging in the U.S. Capitol, at deployments offshore and within individual states.

On Capitol Hill, consider the Vineyard Wind project set to produce 800 megawatts (MW) in its first phase deploying 84 turbines, a joint venture between a wind-solar unit in Avangrid (a NYSE-listed producer of energy), and Copenhagen Infrastructure Partners (an investment fund manager specializing in renewable energy). The installation, off the coast of Martha’s Vineyard, Mass., was set to be the first major offshore wind farm in the U.S., selling electricity to a group of Massachusetts utility with a 2023 start date. The project was slowed down in early 2020 after offshore fishermen raised concerns about its layout interfering with their routes, and the Bureau of Ocean Energy Management (BOEM), the regulator of offshore energy deployments, delayed its permitting process. Late 2020 saw further delays, as Vineyard Wind sought to halt its permitting process (while reorganizing its footprint with larger turbines, only 62 required in Phase 1), and was greeted with an uncooperative BOEM.

What a difference a fortnight makes. Amid a flurry of Executive Orders from the new Biden Administration, offshore wind was mentioned. A White House summary of action from late January, says, “The order directs the Secretary of the Interior to pause on entering into new oil and natural gas leases on public lands or offshore waters to the extent possible, launch a rigorous review of all existing leasing and permitting practices related to fossil fuel development on public lands and waters, and identify steps that can be taken to double renewable energy production from offshore wind by 2030.” In early February, two weeks after President Biden’s inauguration, with a new director at the helm of BOEM (part of the Department of the Interior), the agency announced that Vineyard Wind’s application was back in the review process. The new Director, Amanda Lefton, who comes from a top energy job in New York State’s executive branch, said, in a statement, “BOEM is committed to conducting a robust and timely review of the proposed project.” 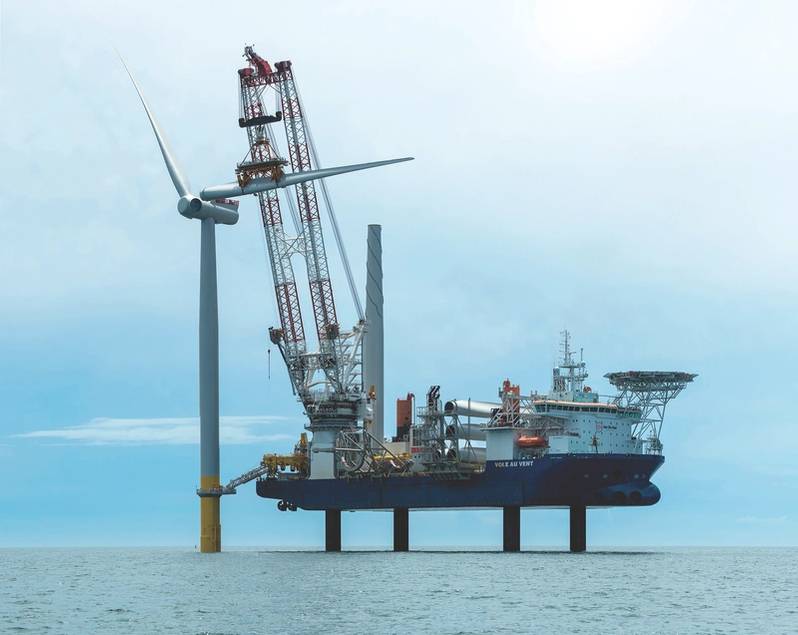 On the legislative front, there were rumblings that The Ocean-based Climate Solutions Act (HR 8632. 116th Congress), a bill that failed to gain traction after its introduction just prior to the 2020 elections, could be reintroduced in the House of Representatives in 2021. The bill’s wording included a nonbinding “Sense of Congress” resolution pointing toward deployment of 30 gigawatts (GW) of electricity from offshore wind by 2030.

The U.S. maritime industry is set to mobilize for the widely anticipated boom. Michael G. Roberts, senior vice president at Jacksonville, Fla.-based Crowley Maritime, testifying at the U.S. House of Representatives’ Coast Guard and Maritime Subcommittee’s mid -February, 2021 hearings on behalf of the American Maritime Partnership (AMP), where he serves as president, described “as what may be a generational opportunity…” for the U.S. maritime industry.

Language in the National Defense Authorization Act (NDAA) for fiscal 2021, passed at the end of 2020, clarified that the Jones Act, an integral feature of the offshore oil patch in the Gulf of Mexico, would be applied analogously to offshore wind. The New Orleans-based Offshore Marine Service Association (OMSA), representing 170 companies, plays a critical role behind the scenes around Capitol Hill. Following the passage of the NDAA, OMSA’s president, Aaron Smith, said, “We are immensely grateful that Congress has passed legislation ensuring that all U.S. laws apply to offshore wind development and providing parity between offshore oil and gas projects and offshore wind projects.” Early efforts offshore Rhode Island and Virginia may offer the initial paradigm for U.S. turbine assembly, where non-U.S. flagged and non-mobile installation vessels handle assembly of components that are ferried out from the shore in Jones Act suitable tonnage. All manner of offshore service could be handled by U.S. based vessels.

In the individual states, the “renewables” catch-phrase also applies to the reinvention of port facilities—now for a new use. The waterfront and port communities all along the U.S. East Coast stand to gain, and huge investments in landside infrastructure, with hefty employment and spending, are also anticipated, pegged by Crowley’s Roberts in his February 2021 U.S. House testimony as “tens of thousands of jobs, tens of billions of dollars in economic output” with ancillary benefit of “play[ing] a significant role in decarbonizing electricity production in the United States.” In early February, Crowley announced a partnership with terminals specialist Watco (a holding of Oaktree Capital, a leading private equity investor, with a maritime presence), to bring a turnkey offering to “…owners, operators and local port authorities in support of the offshore wind industry.” In March, Crowley announced it is teaming up with Danish shipping company ESVAGT to build and operate purpose-built, Jones Act vessels to support the emerging U.S. offshore wind market.

Reinvention is visible up and down the coast. In conjunction with a New York State Energy Research and Development Authority (NYSERDA) procurement award to Equinor (partnered with energy major BP) for two windfarms, the state will earmark $200 million to fund two ports facilities, a one-time container terminal in Brooklyn that would be a staging and maintenance area, and another up the Hudson River in Albany, where towers would be manufactured. The private sector, including offshore project developers, will kick in comparable amount. Plans are in the works for other port projects along the Hudson River and in Long Island Sound, including Port Jefferson, N.Y., once an active shipbuilding center. In Fall River, Mass., the Vineyard Wind project was funding a study of redeveloping the city’s waterfront, while nearby New Bedford had booked leases at an old terminal from Vineyard Wind and Mayflower Wind (an 800 MW project south of Nantucket). In Connecticut, the State Port Authority agreed in early 2020 on a deal that would see a $157 million public/private redevelopment of the State Pier at New London, which handled lumber and general cargo, into an offshore wind staging area supported by a long-term lease from Ørsted. The Danish developer, along with a steel fabricator, has also committed to a major investment for building monopiles (the foundation for the towers) at an old oil terminal later repurposed for the imported steel trades which waned due to tariffs, in Paulsboro, N.J. Further down along the Delware River, an assembly area is planned. In Virginia, an underused container yard, Portsmouth Marine Terminal, has been repurposed as a staging area for Dominion Energy’s massive Coastal Virginia Offshore Wind (CVOW) project, with Ørsted working in conjunction with the state leasing dock space in advance of its 12 MW demonstration project deployed in Summer 2020. Maryland and Rhode Island have seen similar arrangements, with old facilities being repurposed. 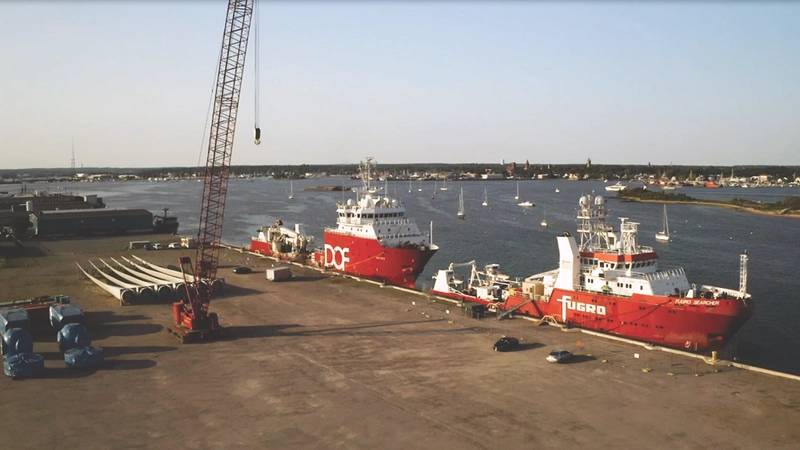 The role of government, going beyond merely the investment component, will be vital. Crowley’s Roberts explained in prepared remarks at the Subcommittee hearing that “like the Europeans, America will need prudent government policies to jumpstart offshore wind development in this country. Regulatory measures needing attention include a more predictable permitting process; a possible regional approach to local content requirements; prompt Coast Guard regulatory actions related to the vessels required to install and service offshore wind turbines; and support and planning for the necessary port infrastructure.” In response to a query from newly elected Congressman Jake Auchincloss, representing a district in southeastern Massachusetts that includes Fall River, Roberts identified “a more predictable and responsive permitting system” as being the highest impact item in how the federal government might assist.

The human factor, identified by DNV’s Prokopuk as a hurdle to be overcome, will also play an important role in realizing the offshore wind ambitions, with the individual states crafting training initiatives. In February 2020, New York State’s NYSERDA announced that $20 million would be earmarked for a to-be-developed Offshore Wind Training Institute, at two Long Island branches of the State University of New York, for training approximately 2,500 workers. In 2019, the state of Massachusetts partnered with its maritime academy on a worker training initiative. Among its other workforce development platforms, a program for retraining fishermen to serve the offshore wind installations was unveiled, with an eye towards the Vineyard Wind project, with estimates of 3,500 jobs to be created. Down the coast in Virginia, Dominion Energy was negotiating with local unions, including electrical trades, for handling interconnections on the first phase of the offshore project, some 880 MW. One caution, however, came from OMSA, voicing concern that the earlier-mentioned hold on offshore oil and gas leasing might reduce the workforce to man vessels in the offshore service roles. 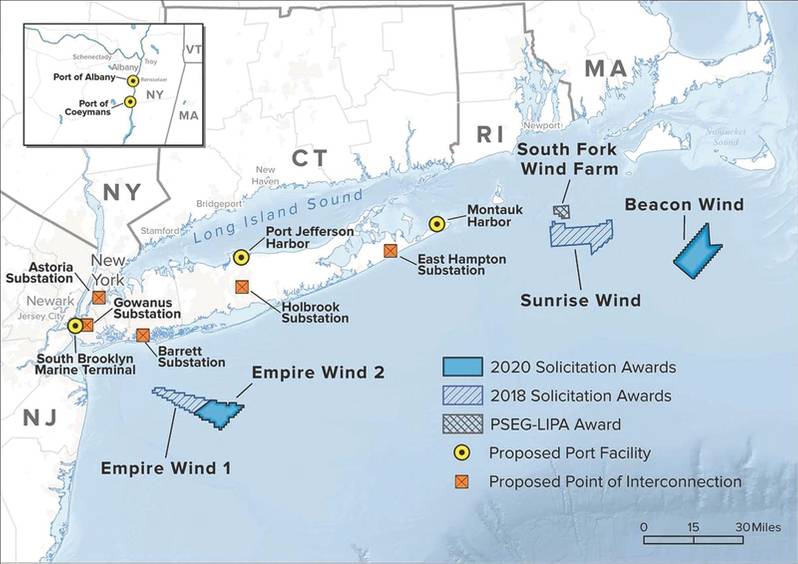 The horizon is bright, but not free of clouds. Some observers have cautioned that the “local content” efforts that have driven the states to invest will need to morph over time into more regional supply chains. In the race to develop hubs, there will invariably be big winners, but also losers, where large capital investments will fail to pay off. New strains of NIMBY-ism and opposition tied to new types of business arrangements are also adding some color. While turbines from the South Fork Wind Farm—a 132 MW project, one of several to be developed by Ørsted and regional utility Eversource—will not be visible offshore, a row has erupted in the wealthy Hamptons enclave of Wainscott, on Long Island’s East End, over the underground routing of onshore electrical cables. To the north, in Connecticut, a dispute emerged in early 2020 between the City of New London and state authorities relating to the business arrangements, and property tax payments on the State Pier. Nearby, in New Bedford, Mass. (with a heavy-lift cargo terminal set to become a staging area for wind projects), local stakeholders are still striving for complementarity with the fishing industry.