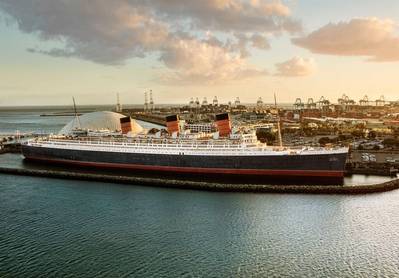 A new plan is being formulated to preserve and improve one of the world's most historic and well-known vessels.

The record-setting superliner Queen Mary has been sitting permanently moored in Long beach, Calif. since its removal from transatlantic service in 1967. A 2015 survey revealed the once glorified liner has been in an escalating state of disrepair, but estimates detailing the extent of work needed have varied.

Long Beach Mayor Robert Garcia said in his State of the City speech Tuesday that “[Los Angeles-based real estate investment and development firm Urban Commons] will be developing a historic preservation blueprint, accessible and transparent to the public, that will map out the preservation projects and critical repairs.”

The 30-year roadmap will outline major renovations with their associated costs, to safeguard the ship’s entire framework as well as maintain its iconic image, Urban Commons said.

John Thomas, Historic Resources Advisor at The Queen Mary, said, “We are working with a marine surveyor and structural engineer to create a plan that covers aesthetic, structural and engineering issues – not only covering the state of these areas today, but anticipating decades of continuous work with associated capital investment.

"Utilizing information pertinent to the ship’s preservation from environmental and engineering reports, a 2015 marine survey and local marine studies, Urban Commons has retained the services of a A.M. Marine Surveys and John A. Martin Associates, Inc. to perform a peer review of these previous studies and develop a 30-year implementation plan. The historic preservation blueprint will determine and prioritize preservation projects with their related costs, address any further studies and establish a comprehensive maintenance and monitoring plan for the historic Queen Mary."

The plan includes annual inspections as well as ‘close-up surveys’ every five years. These reviews ensure that not only is the plan being implemented, but updating and re-prioritizing the plan if needed. Then, every 10 years, an additional decade will be added to the plan, using experience as well as ongoing work and previous inspections.

“During her life, the Queen Mary has transported royalty and refugees, soldiers and celebrities, and now she lives in Long Beach as a historic international treasure,” said Howard Wu, Principle at Urban Commons. “Akin to the ship herself, while we need a robust and realistic blueprint, this plan must be flexible with the ability to evolve and pivot as needed.

“We have learned not only the amount of love and care the ship requires daily, but also completed crucial groundwork ensuring staff and guest safety. There have been many reports and surveys addressing the state of the Queen Mary, and while they may identify preservation projects of today, what about tomorrow, in five or ten years or when the historic ship will provide the iconic backdrop to the 2028 Olympics on the Long Beach waterfront? Maintenance and preservation on our iconic landmark is an ongoing investment, and this blueprint will outline exactly that.

“For the first time, Urban Commons has established additional income sources for the Queen Mary, which feed into a reserve fund to ensure the longevity of the ship. By utilizing the 40 surrounding acres, additional revenue will continue to be generated and we’re excited to share our updated plans for the area around the Queen Mary later this year.”