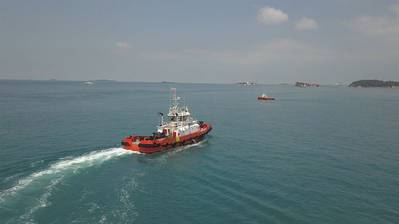 Classification society ABS has awarded Approval in Principle (AIP) to technology in an autonomous tug project from ST Engineering, POSH, and M1 Limited.

The POSH Harvest harbor tug was retrofitted with autonomous navigation and CDCA functions. These functions were remotely monitored from a shoreside control center located in the Maritime and Port Authority of Singapore’s Maritime Innovation Lab via cellular networks.

“As autonomous technology is increasingly transforming the maritime industry, we are committed to enabling and accelerating the application of these technologies in a robust, reliable, and safe way. The integration of our in-house Ship Management and Sensemaking System (NERVA SMS2) with our Autonomous Kit (CDCA technology) in the SMAV is one such example,” said Terence Ho, Assistant Vice President, Marketing & Business Development, ST Engineering.

According to ABS, the SMAV project was one of a series of industry-leading initiatives to inform the development of the recently published ABS Guide for Autonomous and Remote Control Functions, which introduced the AUTONOMOUS notation and another recognizing remote control functions. The Guide sets out a goal-based framework for the implementation of these technologies on vessels and offshore units.