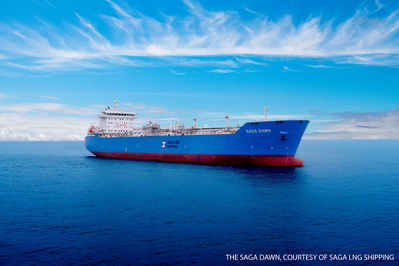 The ABS-classed Saga Dawn, the first LNG Carrier to be fitted with an innovative cargo containment system based on IMO requirements for independent type A tanks, has been delivered to Saga LNG Shipping.

The 45,000-m3 Saga LNG Shipping vessel, which completed three weeks of gas trials in June, was constructed by China Merchants Heavy Industry at its Jiangsu shipyard in Haimen, China.

The LNT A-BOX system was developed by LNT Marine. It features IMO independent prismatic type A tanks as the primary containment. The tanks are supported by laminated wooded supports and a liquid-tight thermal insulation attached to the hull compartment as an independent secondary barrier.