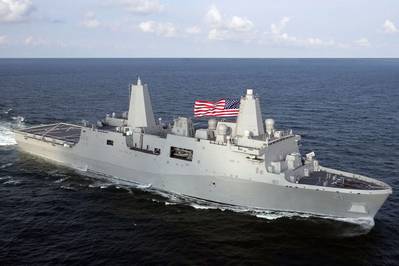 "This was an exceptional sea trial. We followed our planned schedule of events and executed very well," said Richard Schenk, Northrop Grumman Shipbuilding vice president, Tests and Trials. "The ship's fit and finish is excellent, a true tribute to our shipbuilders' hard work, and LPD 21 most definitely proved her worth. The teamwork between Northrop Grumman and the customer created this opportunity for success."

New York (LPD 21) demonstrated a variety of systems including main propulsion, engineering and ship control systems, combat systems, damage control, food service and crew support. Among additional acceptance trial highlights, the ship completed a full power run, self defense detect-to-engage exercises, steering, and anchor handling demonstrations. The ballasting and deballasting tests, during which the ship's well-deck is flooded for future launching of landing craft air-cushion vessels and expeditionary fighting vehicles, were performed in an outstanding manner, with the ballast system test setting a new LPD ship record for time to ballast down.

"The completion of acceptance trials is a major step towards bringing New York into the fleet," said Capt. Bill Galinis, the LPD 17-class program manager for the Navy's Program Executive Office for Ships (PEO Ships). "This week, four out of five San Antonio-class ships were underway at the same time. There's really no better indication that we're delivering urgently needed assets to our warfighters."

The bow stem of New York contains 7.5 tons of steel recovered from the World Trade Center and the ship is named in honor of the victims and heroes of the 9/11 terrorist attack. The future USS New York is scheduled for commissioning in New York City on Nov. 7, 2009.