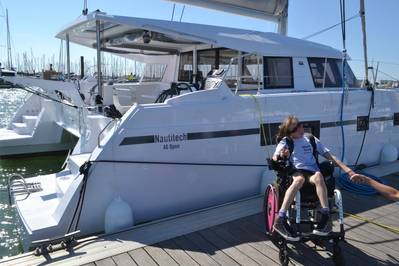 If she is successful, Natasha Lambert will be the first quadriplegic female skipper to cross the Atlantic using breath control. Image courtesy Natasha Lambert.

The celebrities were out in force at the recent Southampton Boat Show. Led by Duran Duran’s Simon Le Bon, ably supported by sailing legend Sir Robin Knox-Johnston, TV wildlife presenter and trained diver Miranda Krestovnikoff, BAFTA award-winning wildlife expert Steve Backshall, explorer, writer and TV presenter Monty Halls and Diane Youdale, otherwise known as Jet from Gladiators. But the real star of the show was Natasha Lambert. She has a condition called Athetoid Cerebral Palsy which means that she has no voluntary control over her limbs and difficulty in articulating speech, but this has not stopped her in her endeavors.

And that has not stopped the 21-year-old enjoying life on the seas. Her father, Gary, has developed the Sip Puff technology that allows Natasha to control the boat using her breath to either turn the rudders or trim the sails. This has enabled Natasha to achieve some incredible adventures and challenges, but the next expedition, to cross the Atlantic as part of the Atlantic Rally for Cruisers (ARC) 2019, is by far her biggest to date.

The boat selected is a Bavaria Nautitech Open 46 catamaran which will be adapted to accommodate Natasha and her team. Any structural adaptations will be undertaken locally where possible and the Sip Puff technology will be designed and installed by Natasha’s father.  Other adaptations will see frames/posts being put in place of each helm seat so that Natasha can be held upright or sitting whilst at the helm; the fitting of a hoist rail in the owner’s cabin area to make movement as safe as possible; and the placing of a treadmill so that Natasha can still complete her exercise regime. The boat was officially named by Natasha and blessed by Rev Amanda Collinson at the show.