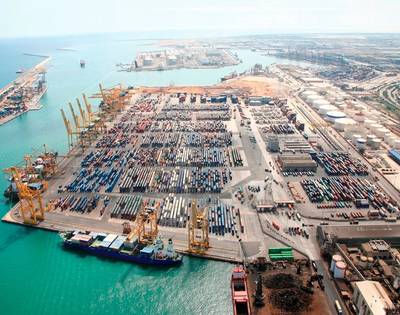 APM Terminals has reached an agreement with Perez y Cia to acquire their majority stake in the Barcelona-based Grup Maritim TCB and its maritime services’ container terminal portfolio in Europe and Latin America.

Grup Maritim TCB has 11 container terminals with an annual throughput capacity of 4.3 million TEUs and an estimated annual container volume of 3.5 million TEUs. The transaction is expected to close by the end of the year and is subject to certain conditions precedent, including relevant approvals. Terms and price were not disclosed.
Grup Maritim TCB consists of Spanish container terminal concessions in Barcelona, Valencia and Castellon, on the Mediterranean coast, along with the concessions in Gijon, on the Bay of Biscay, and in the Canary Islands: Santa Cruz on Tenerife and La Palma on Gran Canaria.
Outside of Spain, Grup Maritim TCB’s terminal operations include Izmir, Turkey; Yucatan, Mexico; Quetzal, Guatemala (under construction, opening 2016); Buenaventura, Colombia, on the Pacific Coast; and Paranagua, Brazil.
APM Terminals CEO Kim Fejfer said “This is an exciting investment for APM Terminals, which adds complementary locations to our portfolio in high growth markets throughout Latin America, in Turkey and a strong gateway presence in Spain. Equally important, Grup Maritim TCB is one of the best run terminal businesses in the market with a history dating back to 1972, when it was first established by the Perez-Maura family in Barcelona. The company has earned a reputation for excellent service and professional people. Being a family company with these attributes makes a combination with APM Terminals a natural fit. I want to thank the Perez-Maura family for entrusting APM Terminals with the legacy of Grup Maritim TCB and look forward to exploring further opportunities of collaborating.”
Grup Maritim TCB CEO, Xavier Soucheiron stated “This agreement with APM Terminals marks a landmark moment in the Grup Maritim TCB journey. We share the same core values and views on how to build on our market momentum, where to invest in port upgrades and improve the entire TCB portfolio for clients. Together we can achieve even more potential in the APM Terminals family.
Joe Nicklaus Nielsen, APM Terminals Vice President and Global Head of Container Port Business Development negotiated the deal and stated “APM Terminals seeks partnerships with best-in-class organizations who can extend our market reach. Working with Xavier Soucheiron and the leaders of Grup Maritim TCB enables us to effectively expand our reach in six countries, enhance our portfolio and achieve our growth goals.”
This latest portfolio expansion of the APM Terminals Global Terminal Network increases the number of operating facilities to 74, in 40 countries across five continents.

The Baltic Exchange's main sea freight index reversed course to inch up on Friday after 21 straight session of declines,…