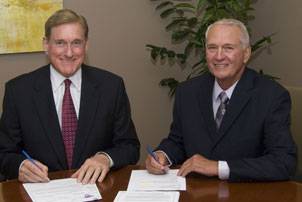 Signet Maritime Corporation, a marine transportation and logistics company, continues to grow with their recent purchase of Colle Towing Company’s assets and business operations. Since 1878, Colle Towing Company Inc., Pasacagoula MS has been providing offshore, harbor and intracoastal marine towing on the Mississippi Gulf Coast. Assets and personnel in Pascagoula will begin operations immediately under the new name, Colle Maritime Company, a Division of Signet Maritime Corporation. The company operates tugs for the Port of Pascagoula in both the Bayou Casotte and Pascagoula River Ports and operates a full-service shipyard and 600 ton Travelift for repair of vessels and barges.   Signet and Colle were recently awarded a twenty-year contract to provide marine services to Angola LNG Supply Services (ALSS) in the Port of Pascagoula, Mississippi.  The agreement, to commence third quarter 2011, includes options to extend for up to ten additional years.

J. Barry Snyder, president and chief executive officer of the combined companies said, “Through this transaction we have strengthened our company, added depth to our fleet and fortified our position in the Port of Pascagoula.  It’s been a busy year for us with the ALSS LNG contract, the acquisition of Colle, and the construction of three new tugs–two for LNG and one ASD here at Colle Shipbuilding & Repair, also a division of Signet Maritime Corporation. The same proud service which Colle has provided for over 100 years will be maintained by Colle Maritime and enhanced by Signet’s ISO 9001:2008•ISM•STCW 95•MTSA•AWO-RCP certifications by the end of October 2010.”

“We are pleased to report all Colle employees have been offered employment with Colle Maritime and have accepted.” Further, Snyder said, “Signet will continue to expand its international marine transportation and logistics services, with concentration in the Americas, Africa and Middle East.”