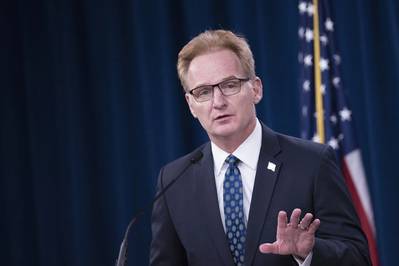 File photo: Acting Secretary of the Navy Thomas B. Modly briefs the press about the Navy’s response to COVID-19, at the Pentagon, Washington, D.C., April 1, 2020. (DoD photo by Lisa Ferdinando)

The acting head of the U.S. Navy, in a surprise speech to the crew of a coronavirus-stricken aircraft carrier, castigated their former commander for writing a leaked letter that demanded the Navy take stronger action to halt the spread of the illness.

Acting Navy Secretary Thomas Modly stood by his decision to relieve Captain Brett Crozier of his command in a speech to crew members of the aircraft carrier Theodore Roosevelt while it was docked in Guam early on Monday.

“If he didn’t think that information was going to get out into the public in this information age that we live in, then he was A, too naive or too stupid to be a commanding officer of a ship like this,” he said.

“The alternative is that he did it on purpose.”

Modly said the leak of the letter amounted to a betrayal by the captain, who was responsible one way or another.

U.S. officials verified a recording of the speech heard by Reuters. Shortly after his comments leaked, Modly issued a statement that said: “I stand by every word I said, even, regrettably any profanity that may have been used for emphasis.”

Reuters was first to report that Modly said that Crozier’s actions may be stupid.

A sailor on board the ship told Reuters that Modly’s speech only angered the crew.

“Nobody likes what he had to say... He made everyone more irritated,” said the sailor, who spoke on condition of anonymity.

Crozier’s crew members showed their disapproval of Modly’s decision by posting videos online last week of their captain’s emotional sendoff. Sailors applauded Crozier and hailed him as a hero, out to defend his crew at great cost to his career.

Some 173 crew have tested positive so far, possibly including Crozier himself.

Modly and President Donald Trump have both been criticized for the decision to relieve Crozier of command.

Democrats in Congress have called for an investigation by the Pentagon’s independent Inspector General, while Democratic presidential contender Joe Biden said Modly “shot the messenger.”

Crozier, who took command in November, wrote a four-page letter describing a bleak situation aboard the carrier as more of his crew began falling ill.

The letter put the Pentagon on the defensive and alarmed families of those on the vessel, whose home port is San Diego. Modly had said Crozier failed to safeguard the confidentiality of the letter.

One U.S. official, speaking on condition of anonymity, said military officials had recommended against firing Crozier, including Chief of Naval Operations Admiral Michael Gilday, arguing that it was better for an investigation to be complete.

The official said it did not appear that Trump spoke with Modly before the firing, but Modly was made aware that the White House wanted Crozier to be relieved of his command.