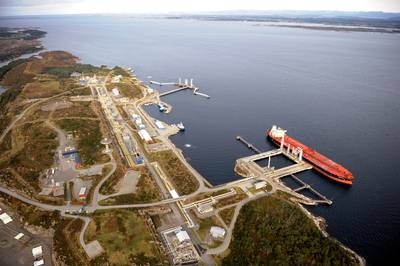 Equinor halted the loading of the TS Bergen Aframax vessel, but other operations were not affected, a company spokesperson said.

Sture is a major export facility for crude, which arrives by pipeline from several offshore fields including Equinor's Oseberg, Lundin Energy's Edvard Grieg and Aker BP's Ivar Aasen, according to Equinor's website.

Activists entered the terminal's safety zone with a boat, and also blocked a road leading to the terminal.

"We decided to interrupt the loading, but the terminal operates as normal," Equinor spokesperson Eskil Eriksen said.

"We have notified the police and they are handling the situation," he added.

The TS Bergen's destination was Rotterdam, according to Eikon data.