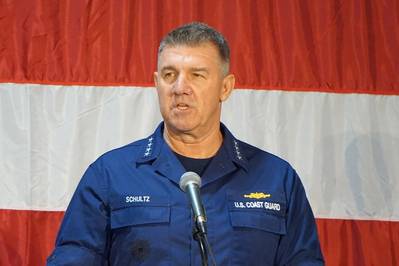 U.S. Coast Guard Commandant Adm. Karl Schultz outlined his vision for the service Thursday during the State of the Coast Guard Address in Charleston, highlighting the organization’s top initiatives, accomplishments over the past year, and challenges facing the service today and on the road ahead.

The 26th Commandant stressed the importance of America's marine transportation system and highlighted Coast Guard's role in safeguarding maritime commerce among the service's many crucial contributions to U.S. security. “Our interconnected global economy relies on efficient ports and waterways. Over 90% of the world’s goods move by sea. We are clearly a maritime nation, and our marine transportation system generates over 30 million jobs and $5.4 trillion annually in economic activity.”

“Today we face unparalleled growth in vessel traffic and complexity within the marine transportation system, from liquefied natural gas exports, to offshore wind farms, to increasingly sophisticated vessels. These factors and a host of others all contribute to an unprecedented demand for Coast Guard services,” Adm. Karl Schultz said.

“Our people are working around the clock on waterways across the country to keep our maritime industry safe and efficient, ensuring American shelves remain stocked and our vast needs for energy met.”

The Commandant said ongoing vessel acquisition programs, including the Polar Security Cutter and Offshore Patrol Cutter, will help the Coast Guard to best perform these duties.

“The Coast Guard operates our nation’s only icebreaker fleet countering malign influence as our nation’s most persistent surface military presence at the Polar regions. We do this with just two cutters: one heavy and one medium icebreaker. This is a woefully unacceptable level of presence in an area where we must be a leading force. Presence equals influence, and we must up our game with respect to high latitude presence.

“The good news is that both the Administration and Congress have duly recognized the burden our Polar Star sailors bear to meet the Nation’s call. That’s why I’m grateful for their recent support to fully fund our new Polar Security Cutter, the first modern heavy icebreaker to be built in the United States in half a century. Additionally, the President requested $555 million in Fiscal Year 2021 to fully fund our critically needed second Polar Security Cutter, and there’s an acquisitions and funding strategy to build a third.

“And today we’re developing operational requirements for medium icebreakers. A fleet of at least three Polar Security Cutters, and three medium icebreakers will ensure American sovereignty and presence in the Polar Regions for decades to come.”

But it is the new Offshore Patrol Cutters that “will become the backbone of [the Coast Guard's] modernized fleet,” Adm. Schultz said. “The first in its class, Cutter Argus, is already under construction and will be delivered in 2022. The Offshore Patrol Cutter program is set to deliver 25 hulls and that fleet will ultimately comprise almost 70% of our offshore presence.”

Adm. Schultz shared plans to restore hurricane-damaged facilities in South Carolina and expand the Coast Guard’s footprint in the Charleston area. “Over the next five years, the Coast Guard will work to consolidate our campus along one waterfront. This gives Charleston the potential to grow into the largest concentration of assets and people in the Coast Guard.”

“Charleston is a first stop to nationwide investment in our service, our facilities and our people,” said Adm. Schultz, who also pointed out the need to address the Coast Guard’s nearly $2 billion shore infrastructure backlog.

“Every mission begins and ends at a Coast Guard facility,” Adm. Schultz said. “Unfortunately, due to years of flat-line budgets forcing tradeoffs, the facilities that our men and women deploy from and return to are crumbling around them.”

Similarly, the Coast Guard's information technology infrastructure is also in need of a major update, the Commandant said: “Years of investment tradeoffs have brought our information technology to the brink of catastrophic failure. Just this past summer over 95 vital systems went offline for several days due to a single server malfunction, impacting our ability to save U.S. citizens, thwart criminals, defend our nation, and yes, even to simply check our email. Our people will never fail our country, but our technology is failing our people.”

Adm. Schultz rolled out a “Tech Revolution” roadmap designed to update the Coast Guard’s 1990s-era hardware, software and analytics. He also described the need to strengthen service innovation initiatives and accelerate the implementation of the best ideas service-wide to field commanders. These include the marine inspector mobility application INSPECT, partnering with Global Fish Watch to combat illegal fishing, linking to the DoD’s Defense Innovation Unit in Silicon Valley, and the establishment of the Blue Technology Center of Expertise at the University of California San Diego.

Adm. Schultz also stressed a need for the Coast Guard to better manage its talent, outlining several personnel initiatives to recruit and maintain a highly-skilled workforce. “Talent management is both our most pressing challenge and our greatest opportunity,” Schultz said. “That is why I believe wholesale investment will enable our talented people to carry out their missions across the maritime domain today and tomorrow.”